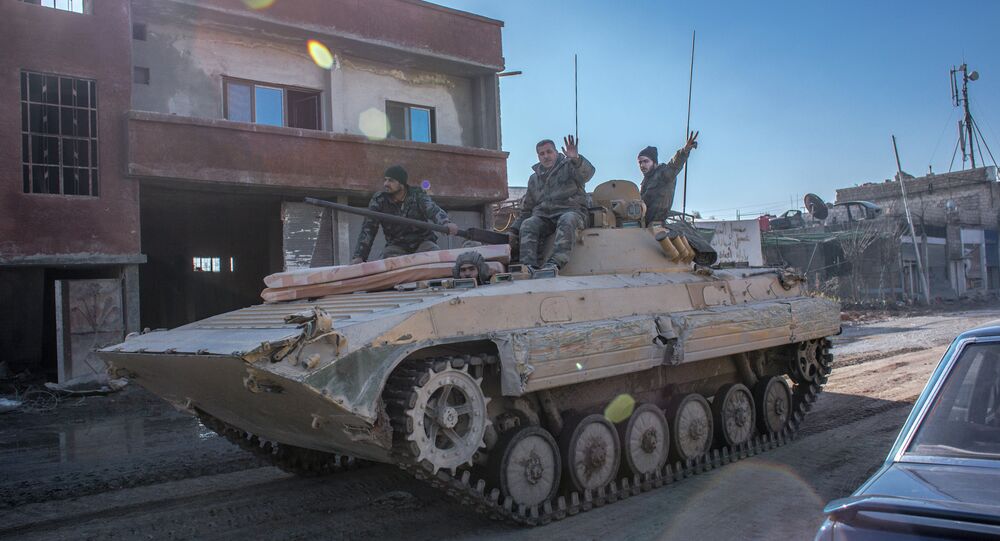 The supplies "are in accordance with international law and in line with all formalities and existing contracts [between the Russian and Syrian government]," the source told the newspaper on Thursday.

The weaponry and military hardware are needed to help the Syrian army counter the advances of ISIL radicals, who have ceased vast areas in the country, the source explained, expressing confidence that the aid will significantly contribute to anti-ISIL efforts.

© Sputnik / Alexey Kudenko
Yes, Moscow's Men Are Teaching Syrians to Use Russian Military Equipment
On Wednesday, Russian Foreign Ministry spokeswoman Maria Zakharova stressed that Russian military specialists deployed in Syria are not participating in military operations in the conflict-torn country and are limited to an "advisory role."

Syria has been mired in civil war since 2011. Government forces loyal to Syrian President Bashar Assad are fighting against several opposition and radical Islamist militant groups, including the al-Nusra Front (Jabhat al-Nusra) and ISIL radicals.

Russia has been engaged in international efforts to find a political solution to the ongoing conflict in Syria and has been providing humanitarian aid to the conflict-torn country.

© AP Photo / Jake Simkin
Eureka! Pentagon Says 'Senseless' War in Syria Should End
Last week Putin said that Moscow and Washington were discussing the creation of an international anti-terrorism coalition, but cautioned that it was too early to discuss Russia getting involved in direct military action against ISIL militants.

The United States is leading an international coalition that has been conducting airstrikes against ISIL positions in Iraq and Syria since 2014.

Russia has repeatedly criticized the US-led coalition for not seeking approval from the UN Security Council and the Syrian government before launching the airstrikes.

The United States has also been supporting the so-called moderate Syrian opposition by providing it with training and equipment.