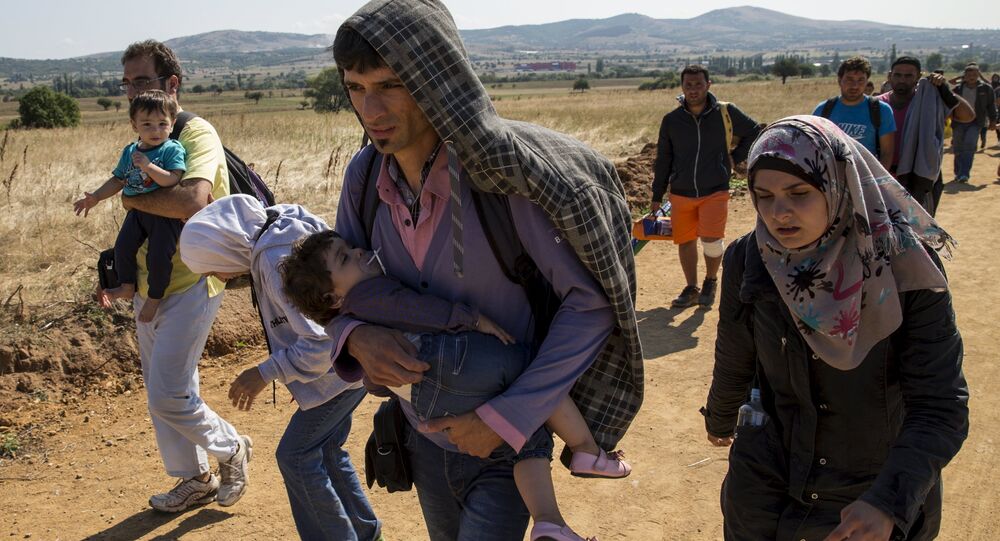 Why Don't Gulf Arab 'Friends of Syria' Take in Any Refugees?

As refugees from Syria stream into Europe, the Gulf Arab financial and diplomatic sponsors of Syria's rebel groups have taken in zero refugees from the conflict.

Friends of Syria was a group of countries including Saudi Arabia, Qatar and the United Arab Emirates, which united to provide diplomatic and often financial support to facilitate "regime change" in Syria in 2012.

The group's Arab country members have since then rejected refugees leaving the country as a result of its civil war and resulting massive humanitarian crisis. The same countries have also sponsored rebel organizations in Syria, often supporting them with financial and logistical aid.

"Why don't you let them in, you discourteous people?" A cartoon in the Saudi newspaper Makkah.

© REUTERS / Antonio Parrinello
United States: 'It's a Genuine Tragedy,' But We Won't Take Syrian Refugees
At the same time, the Gulf Arab states largely rely on migrant labor for everyday work, something that could provide Syrian refugees with the opportunity to provide for themselves in a temporary new home.

According to the BBC, in addition to having complex visa rules and not participating in conventions on refugees, the countries rely largely on migrant workers from Southeast Asia.

To make matters worse, Saudi Arabia has been deporting migrant workers, particularly those from neighboring Arab countries such as Yemen. According Human Rights Watch, the country deported an average of 2,000 migrants per day between November 2014 and March 2015.

In addition, Saudi Arabia's kafala system only allows migrants to enter the country with sponsorship from their employment.

The Gulf countries also foresaw the refugee crisis after Syria's conflict began in 2011, according to Alexander Sotnichenko, dean of the international relations department at Saint Petersburg State University.

"The Gulf countries foresaw the humanitarian catastrophe as a result of the civil war in Syria and in 2011 financed the construction and maintenance of large camps in Turkey and Jordan," Sotnichenko wrote.

© AP Photo / DHA
'I Can Never Look at the Sea Again': Drowned Syrian Toddler's Father Shares His Story With Sputnik
According to Sotnichenko, most refugees from Syria went to Turkey because of the country's announcement that it is prepared to accept refugees. This allowed the Gulf countries to largely deflect the stream of refugees from Syria's conflict, which they had taken part in sponsoring.

"From Turkey it is even more difficult to get to Gulf countries [than from Syria], while Europe is much closer," Sotnichenko added.

As a result, refugees are able to get to Europe illegally from Turkey, while entering Gulf countries is much more difficult, according to Sotnichenko. In addition, Syrian refugees in Saudi Arabia's neighbor Jordan are detained and sent to refugee camps.

Some 1,000 Refugees Attempt to Reach Austria on Foot