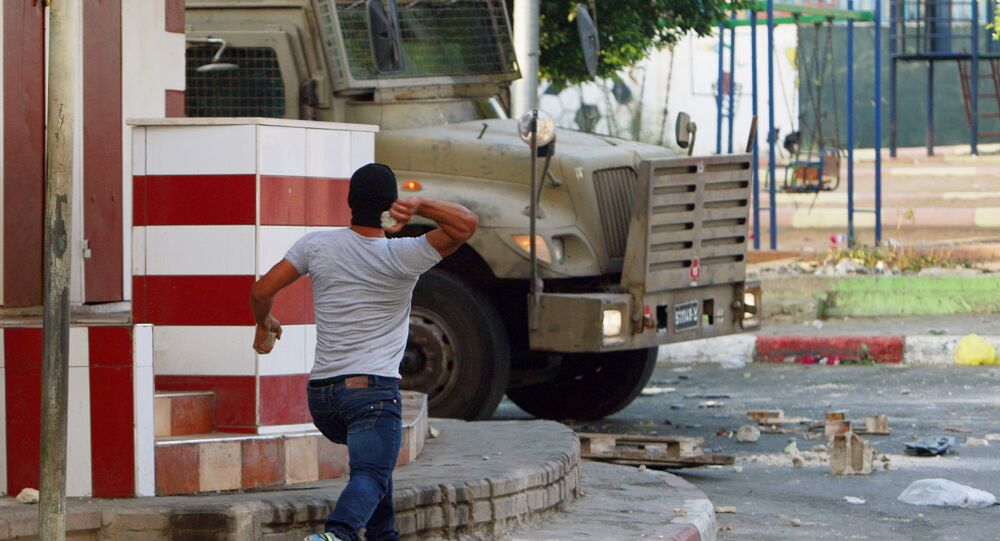 Israeli Prime Minister Benjamin Netanyahu has ordered a review of the current regulations dictating the use of live-fire in incidents of stone-throwing, indicating that he may give security forces more leeway in opening fire on Palestinian protesters.

© AP Photo / Bernat Armangue
Israel Complains to UN About Palestinians' Bid to Fly Their Flag
The review comes as Jerusalem and Highway 443 in the occupied West Bank see a dramatic increase in incidents of stone-throwing, an iconic symbol of resistance since the first Palestinian uprising, or Intifada, in the late 1980s and early 1990s.

A statement released by his office revealed Netanyahu had called for a re-examination of the rules permitting the use of live-fire against stone-throwing protesters. Though the details of the review and its potential implications are unclear, the statement did hint that any changes would likely allow Israeli forces a freer hand in opening fire.

"Since the justice system finds it difficult to deal with minors who throw rocks, changes to orders on opening fire towards stone- and petrol bomb-throwers will be examined," the statement read.

In addition to the review, Netanyahu ordered reinforcement along route 443, which connects Jerusalem to Gaza, and ordered the deployment of 400 Israeli police in Jerusalem to counter the rising number of stone-throwers.

In theory, current regulations permit the use of live-fire only against violent protesters and only in life-threatening situations. However, media and human rights organizations have uncovered a number of cases in which Palestinian protesters fleeing the scene and posing no threat were killed at the hands of Israeli soldiers.

One such case resulted in the death of Palestinian teenager Mohammed Kasbeh, who was shot and killed by an Israeli brigade commander after the officer’s car was struck by a stone. Witness testimony, corroborated by medical evidence, suggest that the youth was shot in the back.

The latest review has prompted the criticism of human rights organizations and Palestinian activists, who have complained that penalties for stone-throwing are already disproportionate.

"The new regulations would mean more escalation, killings and crimes against our people."

Sarit Michaeli, a member of the Israeli human rights organization B’Tselem, echoed Yusuf’s concerns, saying that though the statement is unclear regarding the implications of a review, "it seems from the wording to suggest that because the justice system can’t deal with stone-throwers, shoot them."

In July, the Israeli Knesset passed new legislation that drastically increased the penalty for stone-throwing to up to 20 years imprisonment. There have been no reports of implementing the steeper punishment since then. however.

Around 12 Palestinian minors were shot and killed by Israeli forces during protests and clashes in the West Bank in 2014, according to B’Tselem, four of whom were reportedly involved in stone-throwing. Three Israeli citizens have also been killed by stone throwers in the occupied West Bank since 2011.