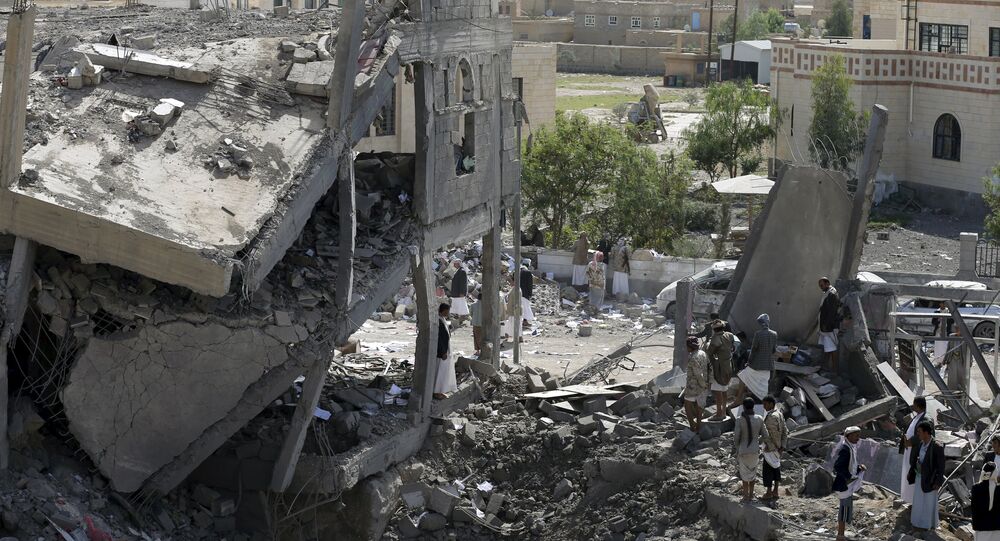 As pro-government fighters, aided by the Saudi-led airstrike campaign, make significant advances against Houthi rebels in Yemen, rights organizations warn that the humanitarian crisis in the country is taking a turn for the worst.

© AP Photo / Hani Mohammed
Anti-Houthi Coalition Closes in on Yemeni Capital Sanaa
Nearly 4,300 people have been killed in Yemen since Gulf allies began bombing the country in March, and roughly half of these people were civilians, according to the United Nations. A further 1.3 million people were forced to flee from their homes as a result of the fighting.

Meanwhile, the United States has more than doubled the number of Pentagon advisors providing enhanced intelligence for coalition airstrikes.  The Obama administration has maintained that the US is only acting in a non-combat advisory role, and it seems that role is only growing.

What began with a group of 20 advisors has now gone up to 45 military and intelligence personnel supporting the Saudi-led coalition identify potential bombing targets. According to the Pentagon, this intelligence support serves to prevent any civilian casualties.

"We are confident that the intelligence and advice we pass on to Saudi Arabia and other coalition members is sound, giving them the best options for military success consistent with international norms and mitigating the potential for civilian casualties," US military spokesman Cmdr. Kevin Stephens said in Bahrain.

But human rights organizations say the numbers indicate otherwise. They note that hundreds of civilians have been killed by airstrikes either based on faulty intelligence, or that simply skewed away from their intended targets. Human Rights Watch (HRW) recently released a video showing airstrikes hitting a building housing power plant workers. Citing HRW, the LA Times reported that at least 65 people died from the attack, including 10 children.

"There was no question this was a coalition strike," Belkis Whille, a HRW adviser who visited the scene less than 48 hours after the strike, told the Times. "That hasn’t been disputed."

HRW has also said that densely populated areas have been targeted by unguided bombs and US supplies cluster munitions, despite claims made by the coalition insisting that they mainly use satellite- and laser-guided missiles in their attacks.

For their part, the Pentagon said that though they provide assistance to the coalition, they are not responsible for individual operations, thereby separating themselves from any accountability. However, increasing the number of advisors indicates that intelligence provided to the Saudi-led coalition has become indispensable for launching these airstrikes, regardless of how the Pentagon spins it.

Aside from the civilian casualty rate, the airstrikes have destroyed much of the country’s key infrastructure, including about a quarter of the country’s hospitals. According to the World Health Organization, millions across the country are living without access to electricity or clean water. With a lack of medical assistance and resources, treatable diseases such as malaria and fever have become deadly.

The shortage of medical supplies, aid, food, and other basic commodities is in part due to the blockade enforced by the Arab coalition, human rights groups say. US warships have also helped enforce the blockade, fearing that Iran will send weapons shipments to its Houthi allies.

Both Iran and the Houthis have denied any claims of weapons transfers, and human rights groups say the blockade has only served to cut Yemen off from much needed resources, plunging the country into an ever-worsening humanitarian crisis.

At Least 20 Dead in Houthi Rocket Attack on Aden