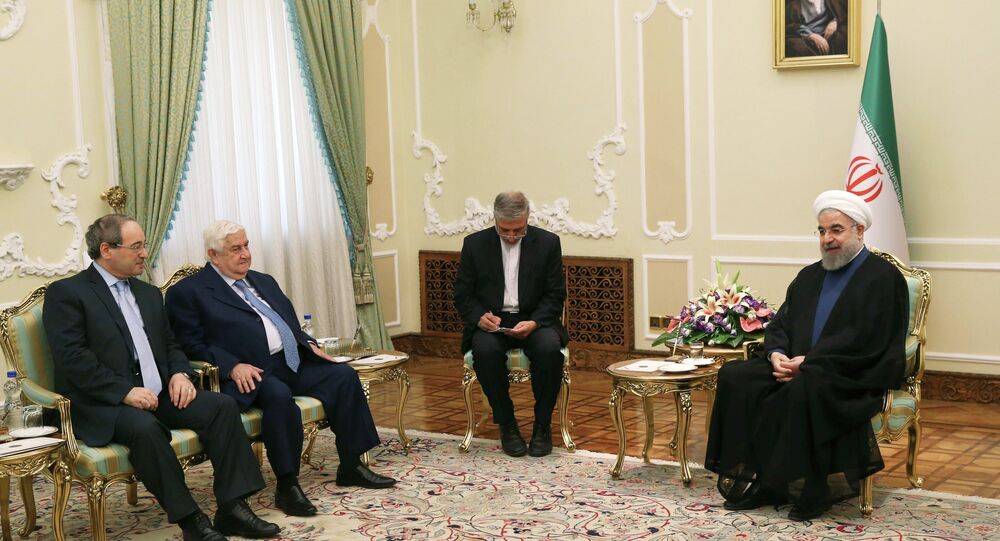 Iran and Russia are working side by side to find a solution for the crisis in Syria, Khaled Al-Aboud, a member of the People’s Council of Syria, told Sputnik Arabic on Wednesday.

© REUTERS / Stringer
Russian,Iranian Diplomats Advocate Political Solution to Syria,Yemen Crises
Al-Aboud’s comments come following Tehran’s announcement that it will submit to the UN a four-point plan on how to end the civil war in Syria. No further details were provided by Iran’s Deputy Foreign Minister Hossein Amir Abdollahian, who announced the plan. But Russia plays a key role in this process as well, Khaled Al-Aboud said.

“While Syria proves its steadfastness in the battlefield and prevents the progress of its enemies’ tools, Iran tries to find out a balance for all parties in the region, and therefore Iran is in contact with Saudi Arabia, Kuwait and Turkey.

“Russia follows the suit of Iran, of another kind of equalization in the region, an overall of the regional political equalization. Russia goes towards having all parties, and it plays a key role in establishing an international equalization to receive all these political parties.

“We are witnessing a new ‘security map’ in the region where Russia, Iran and Syria is the head,” Al-Aboud told Sputnik.

He referred to the old “security map” designed by the United States, which, according to him, completely failed to bring peace to the region.

“We should highlight that the [Iranian] initiative came after the American administration failed to reach its main strategic goal for which it launched aggression in the region. I think that the main issue, the big plan of the Middle East, is behind our backs now. The United States does not have a “security map” any more. Therefore, it needs this Iranian initiative and Russia’s push.”

A fresh peace plan for Syria is sure to influence the state of affairs across the whole region, Al-Aboud argued.

Does War Make Us Safer?
“This initiative is not isolated from the ongoing regional and international events – it is based on the situation in the region. The milestone of the initiative is the Iranian nuclear agreement. What concerns the Syrian crisis, I think that some important changes will also happen in other crises as well: in Yemen, Lebanon, Palestine, or Bahrain.”

Reflecting on the US’ role in the playing out of events in Syria, Mr. Al-Aboud noticed:

As well, the United States gave up on its ‘tools’ in the region, of the House of Saud (The Kingdom of the Saudi Arabia), and pressure Erdogan into some matters…”

© AP Photo / Jake Simkin
From Arming Rebels to Air Strikes: How the West Destabilized Syria
Syria has been mired in a civil war since 2011, as government forces fight opposition and radical Islamist militant groups, including the Nusra Front and the self-proclaimed Islamic State. More than 220,000 people are believed to have been killed in the hostilities to date, with over 12 million displaced from their homes.

While the West has pushed for the government of President Bashar al-Assad to be changed, Moscow argues that Assad is the legitimate president of Syria, and that the Syrian people should be able to choose their government and leaders without outside intervention. Iran too has shown support for the Syrian government.