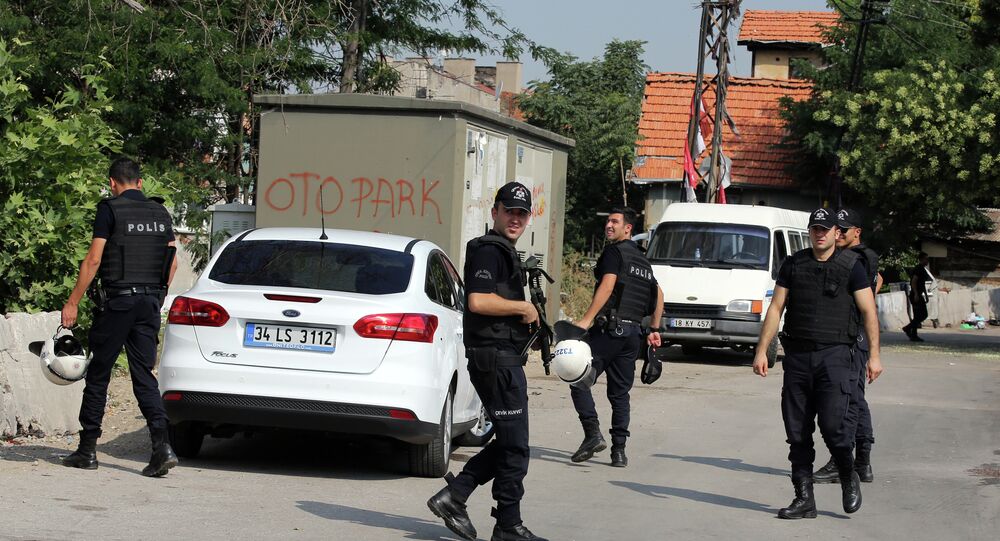 Turkish authorities have intensified anti-terrorism operations in the aftermath of a bomb attack which resulted in 32 deaths in the Turkish border town of Suruc last week.

© AP Photo / Vadim Ghirda
US and Turkey to Provide Air Cover for 'Moderate' Syrian Rebels
Security forces have detained 1,050 suspects in towns across Turkey since the government announced an anti-terror crackdown in the wake of a bomb attack carried out by the Islamic State in southern Turkey last week, the first attack by the militants on Turkish soil.

The Turkish Prime Minister stated on Monday that arrests had been made in 34 provinces across the country in the course of anti-terrorism operations targeting people suspected of belonging to the Islamic State, the Kurdistan Worker's Party (PKK), and the Revolutionary People's Liberation Party-Front, a far-left group.

Security forces detained 256 people on Monday alone, according to officials, including 15 people in Ankara suspected of links to the Islamic State, and 135 people in the southeastern provinces of Diyarbakir and Mardin in an operation against the PKK.

The nationwide crackdown is being carried out in addition to airstrikes on targets in Syria and Iraq. On July 23, the Turkish government announced plans to build a wall and increase surveillance along its 900km (560 mile) border with Syria.

Turkey began airstrikes on the Islamic State in Syria on Friday, marking the first time its armed forces took military action against the militant group, and also bombed targets held by the PKK in northern Iraq. The aerial attacks on the PKK separatists were the first in four years.

The decision to carry out the airstrikes was taken after a suicide bomb attack in the town of Suruc near the Turkish border on July 20, which killed 32 young activists who had gathered to discuss their plans to travel to the Syrian city of Kobane and assist in its reconstruction.

© AFP 2020 / MANDEL NGAN
US Recognizes Turkey’s Right to Attack Kurdish Militants
The day after the bombing, Turkish Prime Minister Ahmet Davutoglu responded to criticism that his administration had not done enough to combat the Islamic State threat, and said the government had "never tolerated any terrorist group."

According to reports in the Turkish media, the bomber was identified by the authorities as Seyh Abdurrahman Alagoz, a 20 year old with ties to the Islamic State who had recently returned from Syria.

The Turkish Prime Minister's office stated on Monday that it "will continue to fight the terrorist threat from inside and outside," and that the government had requested an emergency meeting of its NATO allies to discuss its military operations.