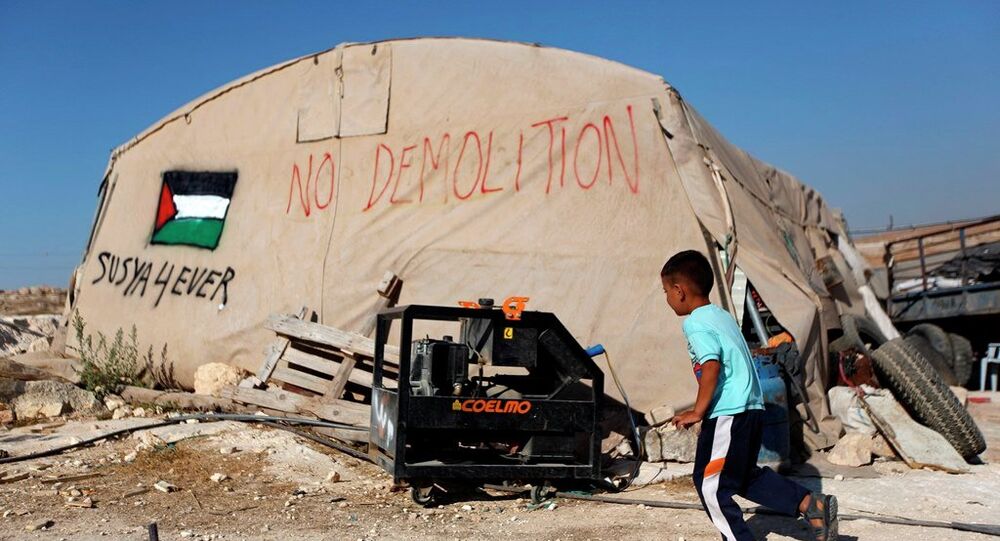 Israeli activists have joined the fight to try and prevent a Palestinian village from being demolished by the Israeli army, by organizing a ‘sleep-in’ protest in the hope of saving the homes under threat.

The protesters have been taking part in a 24-hour 'sleep-in' demonstration at the town of Khirbet Susiya – a small Palestinian village in the West Bank, which is facing the prospect of having the majority of its homes demolished.

Among the protesters are the Rabbis for Human Rights (RHR) group and Ta'ayush – a partnership working towards improving the relationship between Arabs and Jews in the Middle East.

Residents of Susiya Brace Themselves for Arrival of Israeli Bulldozers http://t.co/Pnr5dWsCXZ @IMEU pic.twitter.com/FdOSz2TcCj

While Israel claims that the houses have been built illegally, locals and activists say that Israeli authorities have continually refused to give them proper permission to build their homes, and denied people living in the settlement the opportunity to connect to basic utilities, such as electricity and water.

"All of the residents’ attempts over the years to obtain building permits were rejected by the army. Neither appeals nor requests for clemency helped," a statement from RHR said.

"The only solution is to legalize planning for the village. The residents raised large amounts of money, hired experts and submitted outline plans to the army. The plans were rejected on the basis of discriminatory reasons and unequal criteria."

The fact that Israeli authorities have threatened to demolish houses and remove Palestinian people from area has been seen as highly hypocritical, given that the village of Khirbet Susiya lies in the occupied territories of the West Bank, with many people believing that the Israeli occupation of the land is itself in breach of international law.

It’s widely thought that any moves to demolish houses in the small village of 340 people will further inflame the strained tensions between Palestinians and Israeli officials.

Concerns that the village would be demolished came about following an Israeli Supreme Court ruling in May that gave the country's military governing authority the right to take down the Palestinian homes – on the basis they had been built without proper permission.

These fears were exacerbated after a senior Israeli army officer traveled to the village to inform locals that some of the houses were going to be destroyed before the court appeal date on August 3.

The sleep-in follows a number of international calls for the village to be saved, amid further backlash against the actions of the Israeli government.

US State Department spokesperson John Kirby last week called on Israel to halt demolition plans, saying: "we strongly urge the Israeli authorities to refrain from carrying out any demolitions in the village." It was followed by calls for all 28 EU foreign ministers, who signed a joined statement warning against the "forced transfer" of people and "demolition of Palestinian housing" in the West Bank.