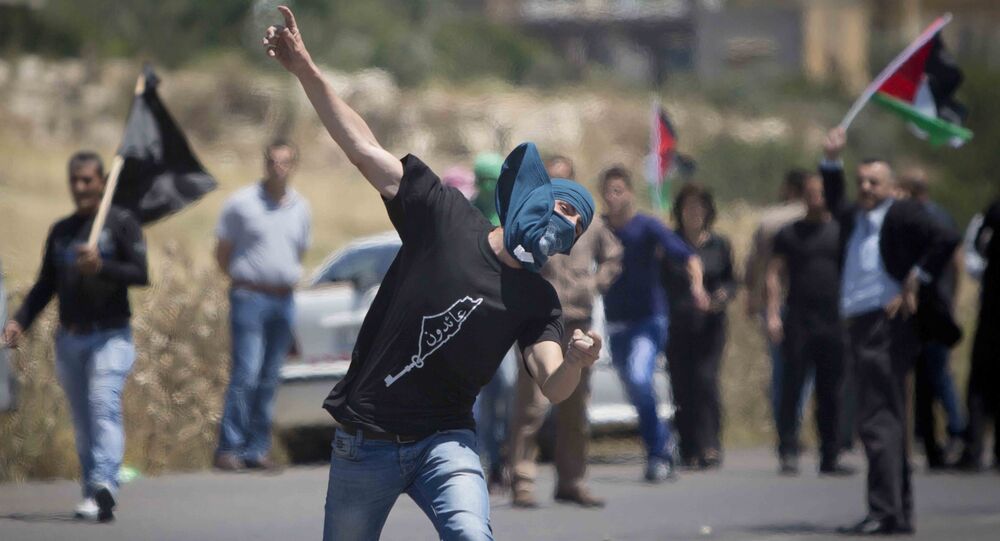 The Israeli Knesset has voted overwhelmingly in favor of new legislation that drastically increases the penalties for stone throwing. While the move has been praised by some in the government as a step in deterring terrorism, others have called it "racist" and "hateful" targeting of the Palestinian resistance.

© REUTERS / Mussa Qawasma
Forced Out: EU Opposes Israel Over Plans to Demolish Palestinian Village
The legislation passed Monday, with 69 members of parliament voting for and seventeen voting against stiff penalties for those convicted of throwing rocks at moving vehicles.

Israel indicts around 1,000 people for throwing stones every year, and prosecutors often seek a three-month jail sentence for the offense if it does not cause injuries. The new law, however, would raise that sentence significantly to a full decade, and an additional ten years if the intent behind the rock throwing can be determined as harmful.

Stone throwing has been an iconic symbol of resistance since the first Palestinian uprising, or intifada, in the late 1980s and early 1990s. Indeed, the act has become largely synonymous with resistance, and the mere image of people throwing rocks is associated with the decades-long Palestinian-Israeli conflict.

According to Israeli Justice Minister Ayelet Shaked of the far-right Jewish Home Party, however, stone throwing is an act of terrorism.

"Tolerance toward terrorists ends today. A stone thrower is a terrorist and only a fitting punishment can serve as a deterrent and just punishment," she said.

The legislation, originally promoted by Shaked’s predecessor Tzipi Livni, has prompted anger and outrage among many, including Israel’s Arab lawmakers.

Jamal Zahalka, an Arab member of the Knesset, accused parliament of hypocrisy, saying the law unfairly targets Palestinian protesters while it neglects to acknowledge the crimes committed against them.

"Imagine bringing before a truly just judge the stone thrower as well as those responsible for him throwing the stones," he told the Times of Israel. "Who would the judge put in jail? The one destroying the stone thrower’s home, expropriating lands, killing his brother, or the boy who threw the stone?"

"You are picking on the person responding to major injustices," he added.

Qudara Fares, head of a Palestinian prisoner advocacy group, described the law as "hateful," saying it "contradicts the most basic rule that the punishment fit the offense."

Ali Abunimah, the co-founder of Electronic Intifada, similarly noted that the law disproportionately penalizes Palestinian protesters and demonstrators while disregarding the violations inflicted against them by Israeli security forces.

"The law is not about stone throwing. It is about repressing any form of Palestinian resistance or protest to Israeli colonization and occupation," he told Al Jazeera.

Human rights groups and activists have long criticized Israel’s use of excessive force against Palestinian demonstrators, including the use of live ammunition, often causing death and injury.

The new law will cover the East Jerusalem territory, but not the West Bank, which is under Israeli military occupation.

Since 2011, three Israeli citizens have been killed by rocks thrown at their cars in the occupied West Bank.