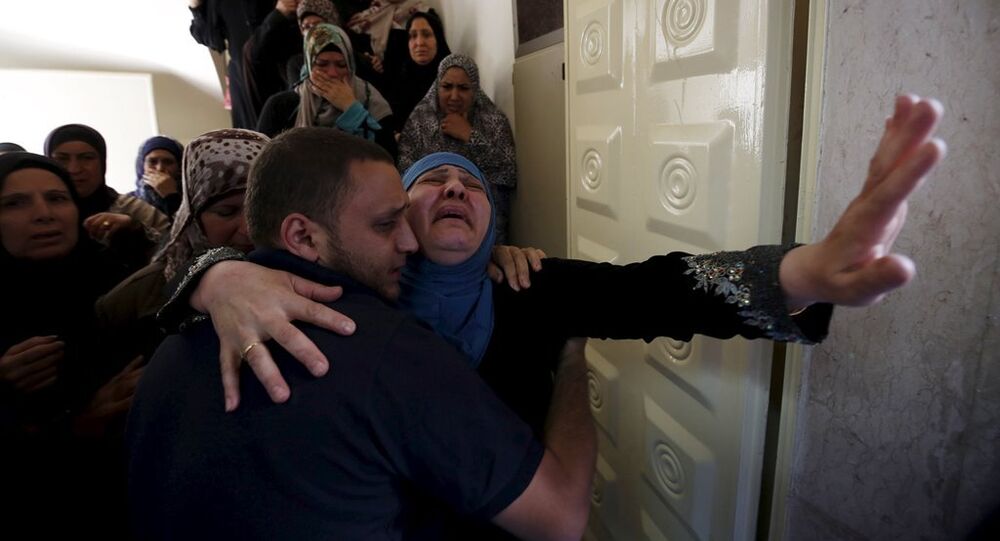 Video footage has emerged purportedly showing the moments leading up to the fatal shooting of a Palestinian teenager by an Israeli army officer, with the new release casting doubt on the officer’s claims that he was under a “real mortal threat” when he pulled the trigger.

The release of footage, acquired by Israeli human rights group B’Tselem, appears to contradict the account of brigade commander Col Yisrael Shomer, who shot and killed 17-year-old Palestinian Muhammad Ali-Kosba after the teenager threw a rock at the officer’s car as it was driving outside a petrol station near the Qalandiya checkpoint between Jerusalem and Ramallah.

Following the incident on Friday July 3, Israeli Major General Roni Numa said that he "fully backed the brigade commander and the way he handled the incident, in which the force was faced with real mortal threat."

Video 'Did Not Accord With Facts'

However the release of the security footage, acquired by Israeli human rights organization B’Tselem from a nearby petrol station appears to show the teenager, along with others, running away from the scene in the moments before the officer took fire and fatally killed the 17-year-old, casting serious doubt over whether the life of officers was in "mortal" danger.

The group carried out an investigation into the death and concluded that the shooting was "unjustified and unlawful," while arguing that the official version of events "did not accord with the facts of the incident."

Citing medical evidence, B’Tselem say that Ali-Koshba was shot three times in the upper body – once in the side of the face and twice from behind, which the groups says backs up eyewitness accounts that the teen was shot as he was running away from the officers.

"The claim that Ali-Kosba posed a mortal threat to the soldiers at the time of the shooting, having fled the scene, is unreasonable.

"There is no doubt that the shattering of the jeep’s front window with a stone endangered the passengers when it happened. However, Ali-Kosba was shot in the back after the fact, when he was already running away and posing no 'mortal threat' to the soldiers. Feeling a sense of danger is not enough to justify any action."

Activists also claim that after shooting the teen, the soldiers did not offer him medical attention and instead drove off, while Ali-Koshba was pronounced dead later that morning in hospital.

The video is the latest piece of evidence casting doubt on Col Yisrael Shomer’s series of events, while it has also sparked further protests from B’Tselem, who accuse Israeli soldiers of not taking proper duty of care when dealing with Palestinian youths.

"The fact that the soldiers drove away without offering the injured youth any medical assistance runs counter to basic human morality. It is also a breach of military regulations, which require soldiers to ensure to the extent possible that persons injured by shooting receive medical assistance."

The shooting took place after a group of youths threw stones at the officers’ car as it drove by a petrol station, smashing the windscreen window.

The case was considered to be quite significant, as it involved such a high-ranking officer, while many top political figures publicly backed the actions of Shomer.

Israel's Military Police Investigations Unit (MPIU) undertook an investigation into the incident. However, human rights activists have poured doubt over the legitimacy of any potential findings.

"Given the automatic public support provided to the shooter, including reassurance that no fault was to be found with his actions, it is highly doubtful that the MPIU could carry out an effective, unbiased investigation," a statement from B’Tselem said.