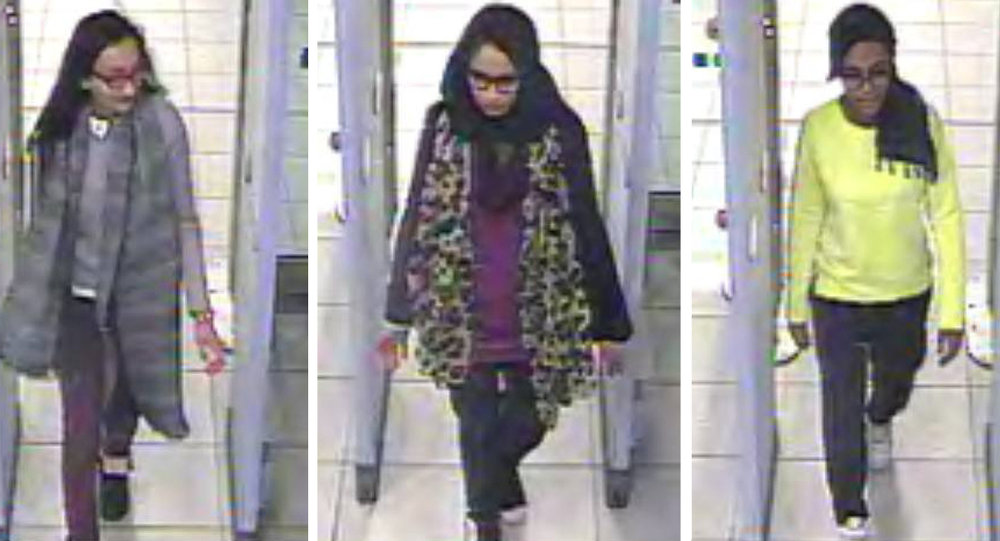 Twitter / Charlie Winter
British ISIL Suicide Bomber Blows Himself Up in Iraq’s Ramadi
Shamima Begum (15), Amira Abase (15), and Kadiza Sultana (16) left home in February to join the Islamic State (ISIL), and two of them got married to men in the Islamic terrorist group, the Guardian reported on Saturday.

Their families, based in East London have disclosed neither which ones got married, nor their whereabouts, as they previously knew "the girls were not together in Raqqa three months ago, and it was because two of them were married," said Tasnime Akunjee the families representative.

Previously the advanced Bethnal Green Academy schoolgirls went to Syria through Turkey and were believed to be based in the ISIL so-called capital Raqqa, as one of the girls contacted her family informing to of them got married "some time ago".

The girls families are said to be "distraught" because of the little chance they will ever come back home.

© AP Photo / Public Domain
Missing British Girls Spotted in ISIL Capital - Report
"They are distraught, because it doesn't bode well for their return. The girls are starting to grow roots socially, and deep roots," concluded Akunjee.

There are some speculations about a video where three girls guided by an armed woman did shopping at a street of Raqqa, however the evidence was found to have little credibility, as their faces were covered.

"The girls were not together at the time of the video," he said. "It's unlikely that they would have been under the aegis of the leader of a woman's centre."

According to the Scotland Yard, assistant commissioner Mark Rowley, the girls have nothing to fear as "we have no evidence in this case that these three girls are responsible for any terrorist offences", following his statement about up to 800 British potential terror suspects have traveled to Syria to join rebel groups there.

© AP Photo /
UK Gov's Call of Duty: Fighting Radicalization With Video Games
There is a little possibility that the three British teenagers will ever call or rejoin their families in London after allegedly being married to ISIL fighters, as they first had to prove their loyalty to the Islamic State.

It's still not clear whether they were promised to get married in Syria having an impressive list of grooms by London-based recruiters.

The International Center for the Study of Radicalization and Political Violence in London estimates that over 700 Britons are currently fighting alongside the ISIL in Syria and Iraq.