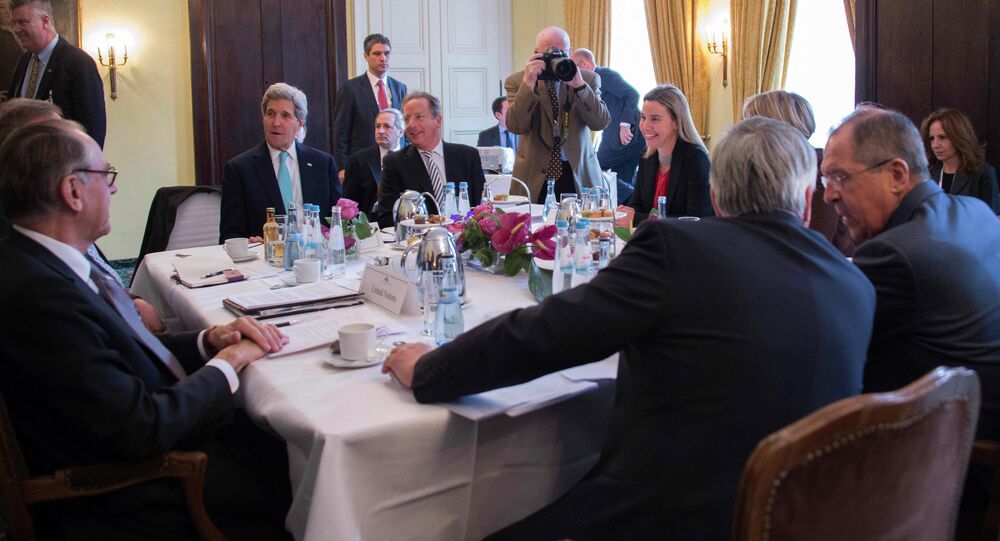 Foreign Minister Riyad Maliki said that Palestine does not put much emphasis on the Quartet on the Middle East in solving the issues between Israelis and Palestinians.

© AFP 2021 / MOHAMMED ABED
Palestine Seeking Additional State Recognition
MOSCOW (Sputnik), Alexander Mosesov – Palestine does not put much emphasis on the Quartet on the Middle East in solving the issues between Israelis and Palestinians, and would prefer to see a new body monitoring the peace process, Palestinian Foreign Minister Riyad Maliki told Sputnik on Wednesday.

"I don’t want to put great emphasis on quartet per say, if there is no real mechanism then I prefer to create a new body," Maliki said.

The quartet was created more than 10 years ago for the purpose of bringing peace to the region and to give justice to the Palestinians, Maliki said. "Unfortunately the quartet failed to do so," the top Palestinian diplomat said.

According to Maliki, if the Quartet could "activate that role" by introducing new elements.

The Middle East Quartet comprises Russia, the European Union, the United States and the United Nations. The foursome met on June 5 at the Russian Mission to the UN in Geneva.

Palestinians seek diplomatic recognition of their independent state on the territories of the West Bank, including East Jerusalem, and the Gaza Strip.

Israel has continued creating settlements on occupied territories in the West Bank, to international condemnation.

In 2014, the United States vetoed a United Nations Security Council resolution on creation of the Palestinian state. The State of Palestine has been recognized by 135 of the 193 United Nations member states, including Russia.

The Quartet on the Middle East has never visited neither Israel nor Palestine, which highlights the lack of understanding between the foursome and the two governments, Riyad Maliki said.

"Why they are not even thinking of coming and making the first visit to the region, you know? They go everywhere but they do not come to Israel and Palestine. Why they are refraining from meeting with the Palestinian President and Israeli Prime Minister?" Maliki said.

According to the top Palestinian diplomat, "we are in one place and they are thinking in another place," which is the problem preventing the quartet and the countries from solving the issues between them.

Palestine seeks to create an independent state on the territories, occupied by Israel since 1967. Israel, meanwhile, keeps creating settlements on the occupied territories.

In 2014, the UN Security Council resolution on the creation of the Palestinian state was vetoed by the United States and Australia.