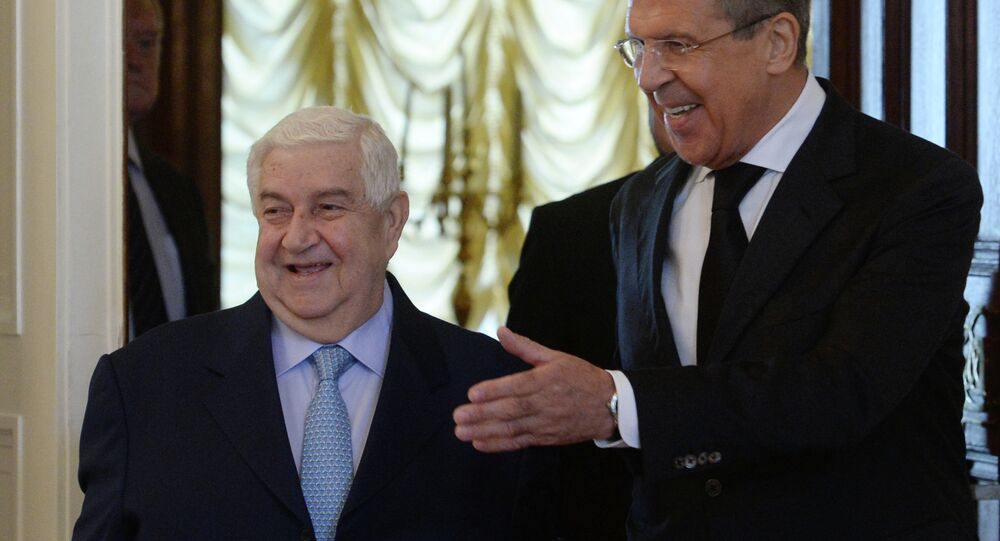 © REUTERS / Mahmoud Hebbo
Syrian Foreign Minister Accuses US of Sponsoring Terrorists
MOSCOW (Sputnik) — There is no excuse to further delay the political process in Syria amid a heightened security threat around the globe, Russian Foreign Minister Sergei Lavrov said Monday.

"Today, when the terrorist threat is hanging over the whole Middle East region and spills far beyond it, there should be no more excuses for delaying the political process," the Russian minister said at a meeting with his Syrian counterpart Walid Muallem.

He noted that during the current Moscow talks, the two sides plan to exchange views "on the current situation in Syria and around it, on our bilateral relations", as well as on ways to ensure that a political settlement, on the basis of consent of all groups involved in the Syrian conflict, can be reached.

Lavrov said that Moscow has provided various forms of assistance to strengthen Syria’s ability to fight terrorism. "We will continue to do so," he added.

© AFP 2021 / JOSEPH EID
Putin Reiterates Russia's Support of Syrian People and Leadership
All countries in the Middle East region need to put their differences aside and concentrate on their common threat of the Islamic State because Syria’s efforts alone are insufficient to tackle the problem, Russian Foreign Minister Sergei Lavrov said Monday.

“Taking into consideration the extent of the Islamic State’s activities, Syria doesn’t have enough to tackle the problem itself and this is why we call on all countries in the region to coordinate their activities in the fight against this horrific threat,” Lavrov said during a joint press conference with Syrian Foreign Minister Walid Muallem.

Lavrov said that Russian President Vladimir Putin had earlier called on governments in the region to put their differences aside and overthrow the Islamic State.

“We are sure, and President Putin has made calls for this, that all countries in the region need to put their differences aside and concentrate all their efforts on the fight against their common threat: the threat of terrorism,” Lavrov added.

© AFP 2021
Losses in Syria Prompt Islamic State to Step up Terror Campaign Worldwide
The minister stressed that Russia actively works with other countries in the region, as well as with Europe and North America, to set priorities and find a common line of cooperation in the Middle East.

During the meeting, Sergei Lavrov emphasized the importance of solving socio-economic issues in Syria, adding that Russia will continue helping the Syrian people.

“Russia, and this was confirmed today by President Putin, will continue to support the Syrian people, the Syrian leadership in solving socio-economic problems during the current crisis, in its efforts to improve and strengthen its defense capability amid the terrorist threat,” Lavrov said.

Syria has been in a state of a civil war since March 2011, with government forces battling several militant groups in the country. According to the UN, the humanitarian crisis is currently the world's most severe, with over 220,000 people killed and over 11 million displaced.

US to Provide Additional $360 Million in Syria Aid - State Department