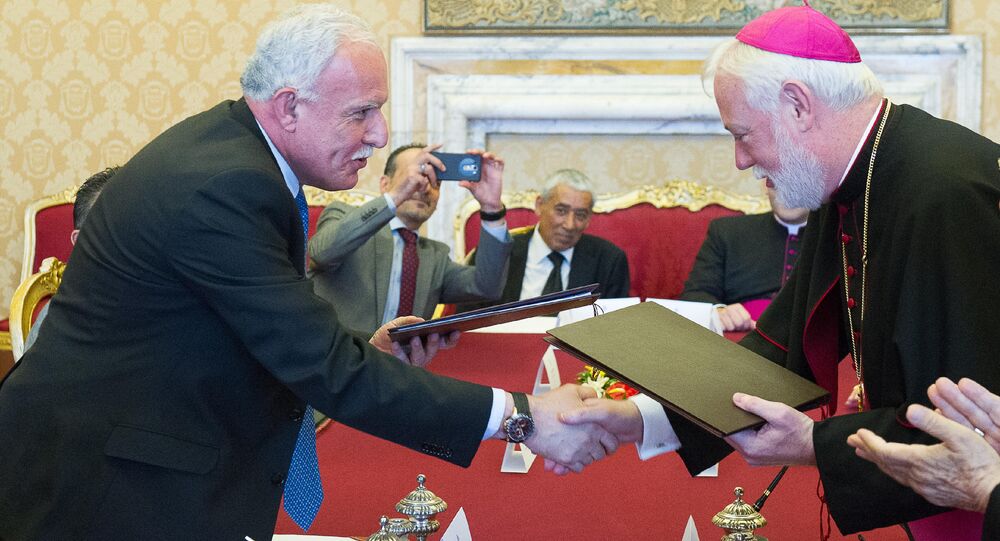 Palestine's increased recognition in the international community has continued, with the Vatican signing it's first treaty with the "State of Palestine," calling for "courageous decisions" to be made to help end the ongoing Israeli-Arab conflict and secure a peaceful two-state solution.

The treaty relates to the Catholic Church's activities in areas controlled by the Palestinian Authority (PA) and comes after the Vatican first announced in May that it would formally recognize the Palestinian state.

Israeli officials have condemned the signing of the treaty, saying that the recognition of a Palestinian state is "a hasty step (that) damages the prospects for advancing a peace agreement."

The Vatican's foreign minister, Archbishop Paul Gallagher disagreed, saying that he hoped the agreement would help to act as a "stimulus to bringing a definitive end to the long-standing Israeli-Palestinian conflict, which continues to cause suffering for both parties."

He also urged direct negotiations between Israeli and Palestinian officials to resume in order to work towards a two-state solution.

"This certainly requires courageous decisions, but it will also offer a major contribution to peace and stability in the region," he said.

While more than 130 countries around the world, including Russia, China and Poland recognize Palestine as a state, many western governments have refused to join the global consensus until fairly recently.

#Vatican signing statement of Palestine agreement says it can be example of "dialogue and cooperation" in Middle East w/ Christians, Muslims

The UN General Assembly adopted a 2012 resolution recognizing Palestine as a non-member observer state, despite some protestations from countries such as the US and Canada, and abstentions from other western representatives.

Many critics argue that the close nature of Israel's relationship with the US means that many other allied countries are not keen to change their view on Palestine.

Iceland was the first western European state to officially recognize Palestine in 2011, while Sweden became the second to do so last year in a trend that has seen many other western nations express their support for Palestinian recognition.

© REUTERS / Ammar Awad/Files
Recognizing the State of Palestine
A hugely symbolic decision was taken by the UK parliament in October last year, with the House of Commons passing a non-binding motion calling on the government to recognize Palestine.

However, the government under David Cameron has chosen not to follow up on the decision, echoing the arguments put forward by Israeli and US officials, saying that while it does support the Palestinian statehood, it needs to happen at a suitable time.

Palestine's integration with the international community also comes as the Palestinian Authority's handed over its first submission to the Hague-based International Criminal Court (ICC), where it has accused Israel of various crimes committed during last year's military offensive in Gaza.