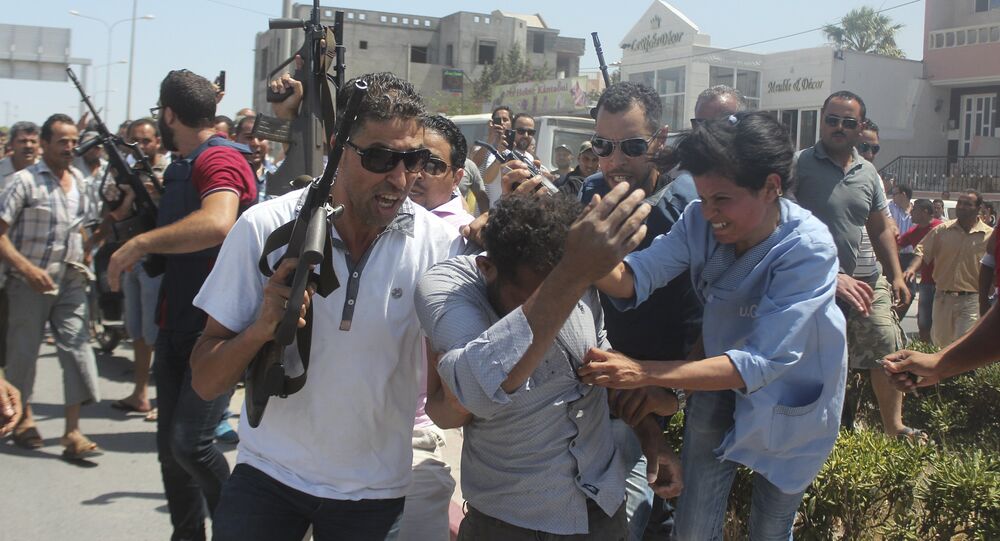 The unidentified shooter who opened fire on the beach was killed by security forces. Reports emerged early Saturday that the self-proclaimed Islamic State terror group claimed responsibility for the attack.

Thirty-nine people, including foreigners, have been killed and dozens more injured in an attack on two separate hotels in Tunisia's resort city of Sousse on Friday, the country's Interior Ministry said. According to local police, victims of the attack include five tourists from Germany, four from the UK, and three from France.

Airplane destined for #Sousse region in #Tunisia returns to Brussels -- what will others do? pic.twitter.com/dHKLuKh4dN

"The terrorist opened fire on tourists at the Imperial hotel in the Tunisian city of Sousse," Aisha as-Saafi, a journalist with Tunisian newspaper Ad-Damir, told Sputnik.  "The second attack was perpetrated by another terrorist not far from there. I think the two attackers preplanned which area each of them would target"

According to the ministry spokesman, one of the unidentified shooters was killed by security forces, and the other was captured.

Picture (unverified) purportedly depicting one of the gunman who carried out the attack in #Sousse #Tunisia pic.twitter.com/X0p4294xmH

Soon after the attack, Tunisian security forces reportedly found a suspicious object they think might be a bomb.

The incident came amid a spate of other attacks across the globe: an explosion at a French factory and a suicide bombing in a Kuwait mosque. It is not yet known if they are related to one another.

Tunisia has been on high alert since March, when three Tunisians and 20 foreign tourists were killed after gunmen opened fire in the National Museum.

#Sousse remains a top recruiting area for #ISIS. I was there in Feb. talking to young men considering joining: http://t.co/tQOi7IXGms

The hotels are in the tourist complex of Port El Kantaoui, some 10 km off the city of Sousse in central Tunisia. Sousse is a popular tourist destination among Europeans, especially Brits.