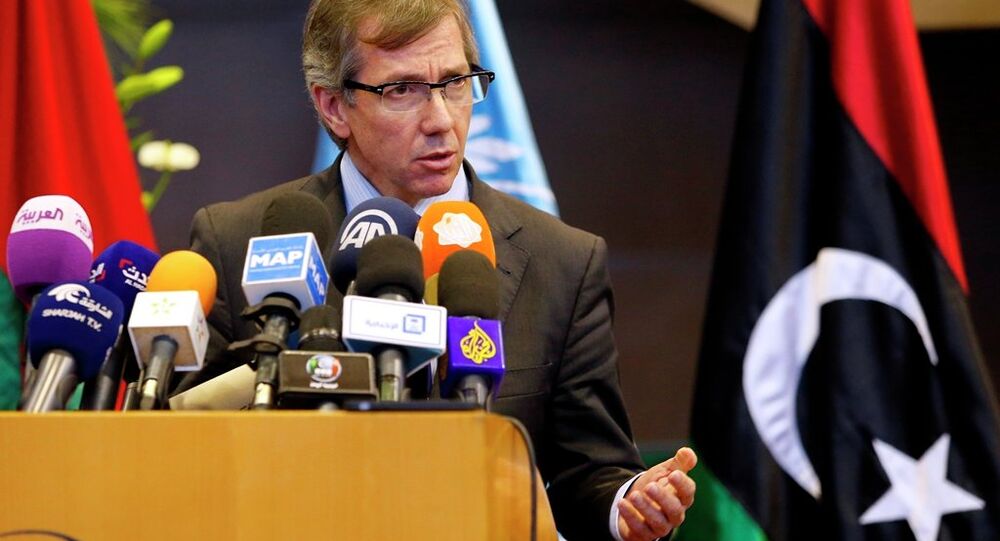 United Nations-led talks began on Monday in the Moroccan resort town of Skhirat to attempt to find a political solution to the chaos in Libya following the NATO-backed uprising that has left the war-torn country rudderless and in all-out civil war.

Libya plunged into chaos after a 2011 NATO-backed uprising toppled and killed veteran dictator Muammar Gaddafi. Britain joined France and the US in the air strikes to allow opponents of Gaddafi to take control of the major cities of Libya. In September 2011, the UK Prime Minister David Cameron and French President Nicolas Sarkozy were given a rapturous reception as they toured Tripoli and Benghazi, in the immediate aftermath of the air strikes.

Sources: Cautious optimism in #Morocco's #Skhirat ahead of the final round of UN-brokered talks aimed at ending #Libya's political crisis.

"It is great to be here in free Benghazi, and free Libya," UK Prime Minister David Cameron said immediately after Gaddafi was toppled and killed. "Your city was an inspiration to the world as you threw off the dictator and chose freedom. People in Britain salute your courage."

"You wanted peace, you wanted liberty, you want economic progress. France, Great Britain and Europe will be on the side of the Libyan people."

Their promises turned hollow as the NATO forces retreated, leaving civil war behind. There are now four rival organizations trying to control Libya. The first is the internationally recognized government of the Council of Deputies elected in 2014, which has the loyalty of the Libyan Army.

Don't you just love the way America's apologists describe the invasion of Iraq and the destruction of Libya and Syria as 'mistakes'. #irony

The second is its rival Islamist government of the new General National Congress based in the capital Tripoli, led by the Muslim Brotherhood, backed by the wider Islamist coalition known as "Libya Dawn" aided by Qatar, Sudan, and Turkey. The other two comprise The Islamist Shura Council of Benghazi Revolutionaries and ISIL.

However, the country has now disintegrated into a patchwork of militias fighting each other, which has allowed ISIL to establish itself and take advantage of the chaos. The internationally recognized government has had to operate out of the East of the North African oil state, while an armed alliance known as Libya Dawn took over the capital Tripoli and set up its own self-declared government last year.

The United Nations Support Mission in Libya (UNSMIL) is leading the latest round of Libyan political dialogue sessions in Skhirat. Ahead of the talks UNSMIL said in a statement:

"The Mission has received thousands of messages from Libyans gravely concerned about the deteriorating conditions in their country."

They are demanding the swift resumption of the dialogue talks and expressed hope that Libyan political actors would "seize the opportunity and expedite the dialogue process in order to quickly conclude a political agreement that will bring an end to the conflict in Libya," the statement said.

UNSMIL is of the firm conviction that this round will be "decisive," it said. The Mission is urging Libyan stakeholders to engage in the forthcoming discussions in a spirit of reconciliation and compromise, as well as a determination to reach a political agreement to bring peace and stability to Libya.

The head of UNSMIL, Bernardino León said "This is a moment of truth [June 18]." He reminded those at the talks of the importance of reaching a consensus before the month of Ramadan, "a moment of peace…of reconciliation" in a country that is now "really at the limit."