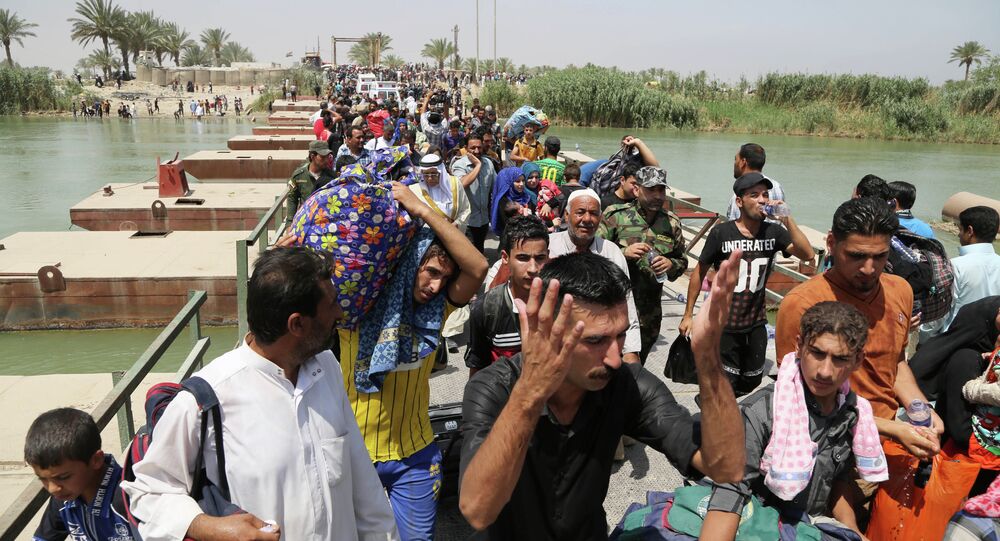 After the capture of a major dam by Islamic State militants, officials in Iraq worry that the conflict will become a brutal war for water, with dire consequences for civilians.

After Ramadi, the capital of Anbar province fell on May 17, reports surfaced earlier this week that IS had seized and closed a dam in the city, cutting off water to pro-government towns and threatening to create a humanitarian crisis.

The self-proclaimed Islamic State terror group is waging a "filthy water war" said Sabah Karhout, the head of the provincial council in Anbar, Iraq's largest province. The closing of the dam cut water to two pro-government holdouts, the regions of Khalidiyah and Habbaniyah, to the east of the city.

The dam closing provides a distinct tactical advantage as it lowered the level of the Euphrates, which has been a barrier between IS militants on its northern bank and pro-government forces on the southern. With the water level dropped, its easier to cross and attack Iraqi forces trying to retake Ramadi.

The new vulnerability of the river to militant crossings means that security forces will have to be redeployed along its banks.

"Previously they had to monitor only the bridges and certain areas, but now all of the river will be crossable," Hikmat Suleiman, a spokesman for the governor of Anbar province, told Reuters.

"Daesh may not have enough fighters to face us in a conventional battle right now," said Arkan Khalaf al-Tarmuz, another provincial council member, using an arabic name for IS.

"So they are using water as a weapon to weaken areas where there are military bases," Tarmuz said.

Such a sudden change of a river's flow in the arid region comes with stark consequences for anyone in the region who relies on that river.

"Cutting the water is the worst crime they could commit. It will force children, women and elderly people to flee and allow them to move in to launch attacks," said Karhout.

This isn't the first time IS has taken control of dams or waterways as a weapon of war. Last summer, militants temporarily seized the Mosul dam — Iraq's largest — which had the potential, if destroyed, to flood not just Mosul itself, but also Baghdad, 400km (250 miles) away, at the potential cost of tens of thousands of lives.

"In the arid lands where the Islamic State fights, control of water is the ultimate weapon of terror," said the intelligence consultancy, the Soufan Group, in a briefing note Wednesday.

A Battle To Last A Generation

Ramadi was seized in May using a wave of truck bombings during a blitz that lasted 3 days. While Prime Minister Haider al-Abadi had said they'd retake the city in a matter of days, government forces are now focused on sealing the city off, and the dropping of the Euphrates will leave Iraqi state forces more exposed to IS attacks.

After the fall of the city, the worst military setback since forces started battling IS fighters last year, Abadi was reluctantly forced to call on an umbrella group of mostly Shiite, Iran-backed militia and volunteers known as Hashed al-Shaabi (Popular Mobilisation). Abadi and Washington had hesitated to bring Shiite forces to a Sunni province for fear of aggravating secular tensions.

US General John Allen, who is coordinating the international effort against the Islamic State, emphasized the importance of having Sunni forces to later stages of the fight to retake territory from IS.

"But then we have to secure the population and that should be done with Sunni police or Sunni tribes, and we're trying to invigorate both of those," he said.

The day after a Paris meeting of the US-led coalition that has been aiding in the fight against IS, Allen said the battle to defeat the jihadists could take "a generation or more."

What is the Real Target in Obama’s Airstrikes on ISIS?