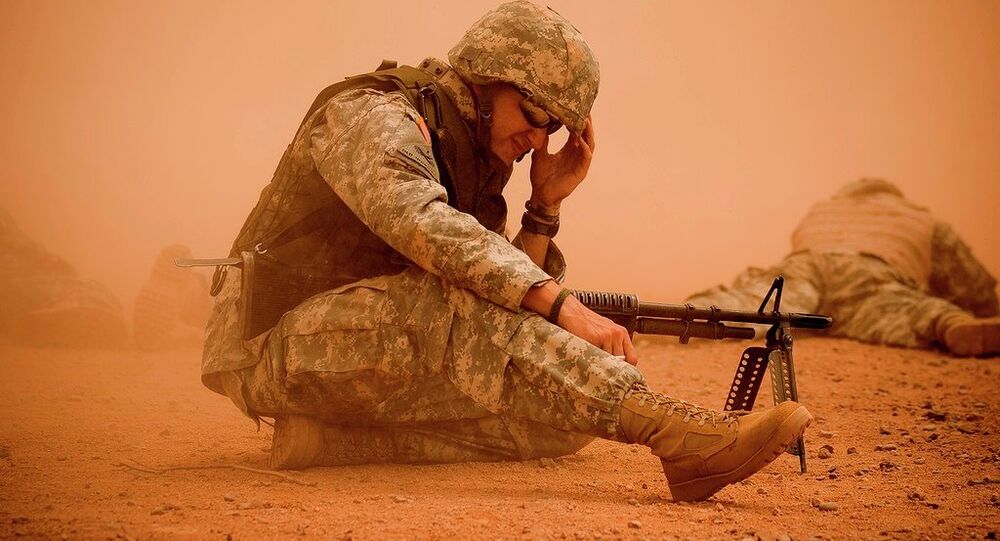 With western officials meeting in Paris to discuss the ongoing struggles associated with the anti-ISIL campaign in Syria and Iraq, a UK-based defense expert has slammed the US-led coalition's military efforts, saying the strategy is "failing", with no clear ending to the conflict in sight.

Following recent developments in the Middle East, which have seen the Islamic State take control of the cities of Ramadi in Iraq and the historic city of Palmyra in Syria, 24 ministers from countries involved in the anti-ISIL alliance, together with representatives from top international organizations are meeting amid fears the current strategy is not stopping the jihadists' advance.

Many experts have criticized the western approach taken towards ISIL in Iraq, arguing that a combination of air strikes, plus the training and arming of the Iraqi army and Kurdish peshmerga forces is not sufficient enough to combat the threat posed by ISIL, whose divisions contain some well-trained former Iraqi army officers who operated under Saddam Hussein.

Defense analyst Anthony Tucker-Jones told Sputnik that the coalition's attempts to rely on the Iraqi army to fight against ISIL forces are ultimately flawed, given the Shi'a-Sunni sectarian divide in the country, with many Sunnis defecting to fight for ISIL, instead of fighting for the mainly Shi'a government forces of Iraq.

"Yes I do think it [the strategy] is failing. The problem we've got, particularly in Iraq of course, is that the vast bulk of the Iraqi military before ISIL took over were recruited from the Sunni community.

"So of course now we've got ISIL, with pretty well trained former Iraqi officers within their ranks, and that's what's undermined the Iraqi army from the word go."

"In a democracy you've got to be careful for what you wish for."

"So in the case of Iraq, you've got a Shi'a government and a military who were mainly made up of Sunnis, but who have now gone over and defected to ISIL because they're not happy at having a Shi'a government. And of course the only thing you can replace that lost manpower with is the Shi'a militia groups in Iraq and the Kurdish fighters."

West 'Sticking Their Fingers in the Dam'

On top of the strategy in Iraq, the approach taken in Syria has been equally criticized by experts and politicians alike, with Russian officials arguing that the West's tactic of arming 'moderate' Islamic rebel groups, rather than supporting Bashar al-Assad's forces is fragmenting support and allowing the conflict to proliferate further.

How the United States helped #IslamicState carve its caliphate in blood across Iraq and Syria @MattCarr55 | http://t.co/P4oywYotFU

Anthony Tucker-Jones says that the current approach in Syria isn't sustainable, and is likely to cause more ongoing divisions and problems in the country.

"I think the coalition against ISIL is practically sticking their fingers in the dam which is leaking all over the shop. Fundamentally what we've got in Syria is no real political will for intervention there, which leaves the highly porous Syrian border with Iraq open to Islamic State influence. There are air strikes and drone strikes going on, but they're nowhere near sufficient enough to close the border."

Mr Tucker-Jones drew comparisons between the current situation in Syria and Iraq to that of Vietnam in the 1960s, when the porous border between Vietnam and neighboring countries facilitated the flow of fighters, weapons and supplies across borders, which further complicated western military efforts.

West has 'Willful Neglect of the Outcome'

Many have blamed the severity of the current conflict in the Middle East on recent western military interventions, with the US-UK led 2003 Iraq invasion, 2011 bombing of Libya and Afghanistan campaign seen by critics as being hugely destabilizing factors leading to further sectarian unrest in the region.

Mr Tucker-Jones believes that the West's current strategy will fail to calm these tensions, with no foreseeable end to the current conflict.

"I don't think the fighting will come to a conclusion very quickly. The problem faced by the West of course in the Middle East is the Islamic community's ongoing civil war between Shi'a and Sunni groups and that ultimately is what drives the conflict in Syria and Iraq."

© Flickr / Anthony Quintano
America Under Attack: ISIL Threatens to Nuke US Next Year

As a result of these interventions there have been calls for former British Prime Minister Tony Blair to face war crimes charges for sending Britain to Iraq, while others, including former UK opposition leader Ed Miliband attacked current PM David Cameron for not following through with an adequate exit strategy in Libya, arguing that the 2011 bombing campaign left the country divided between government forces and rebel troops.

"Obviously, with Iraq, there were plans to topple Saddam Hussein and that was done quite easily, but after that the West didn't really seem to have any significant solutions. The same thing happened in Libya with attempts to topple Gaddafi, and we're seeing it in Syria with Assad.

"So yes I think the problem with the West is that it has this urge to intervene and try and help, but on many occasions it doesn't work out well."