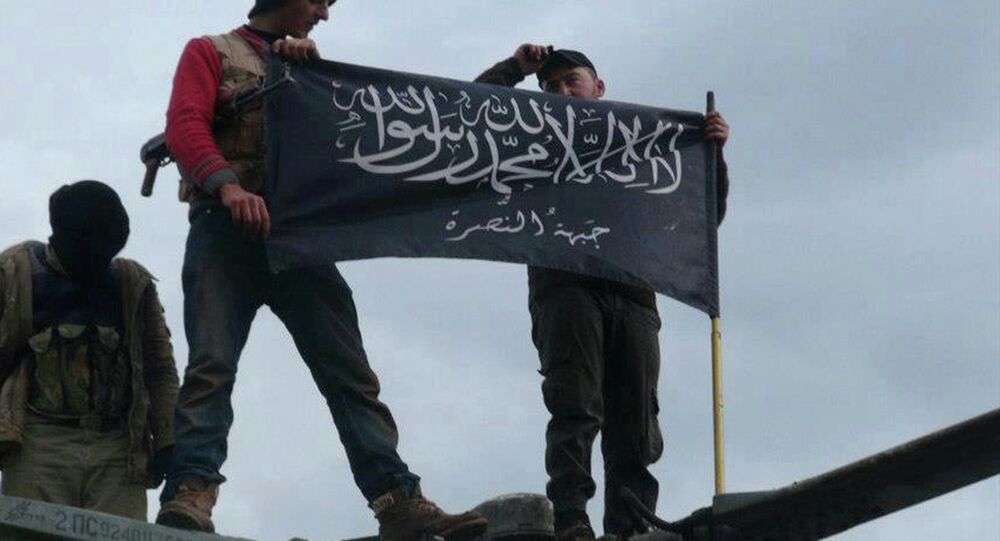 The Al Jazeera news network has displayed surprising editorial standards in the past, facing multiple accusations of whitewashing the Syrian conflict. The network has now gone to new extremes, interviewing and promoting the leader of the al-Nusra Front, al-Qaeda’s arm in the region, and a recognized terrorist organization.

"We are only here to accomplish one mission, to fight the regime and its agents on the ground, including Hezbollah and others," al-Nusra leader Abu Mohammed al-Golani told Al Jazeera as part of an exclusive.

Al Jazeera’s sympathies are clear throughout the interview, as its paints the terrorist leader as moderate figure, even as he makes not-so-veiled threats against Western governments and Syrian minorities alike.

"Our options are open when it comes to targeting the Americans if they will continue their attacks against us in Syria," Golani said. "Everyone has the right to defend themselves."

Golani also contradicts his own claims about not seeking revenge against the Alawite minority, supporters of the Syrian government.

"The battle does not end in Qardaha, the Alawite village and the birthplace of the Assad clan," he said, adding that members of the Alawite sect should lay down their weapons and renounce the Assad government in order to be safe.

The al-Nusra Front, also known as Jabhat al-Nusra, is the Syrian branch of al-Qaeda operating in Syria and Lebanon. Described as one of the most aggressive factions in the Syrian Civil War, it is recognized as a terrorist organization by the United Nations, as well as Russia and the United States.

© AFP 2020 / Fadi al-Halabi
Supporters of the Al Nusra Front take part in a protest against Syrian President Bashar al-Assad and the international coalition in Aleppo on September 26, 2014

Published on the Qatari-owned network’s English-language site, the interview has already raised a number of eyebrows. Syria’s United Nations ambassador, Bashar al-Jaafari, said it was used to "promote terrorism and make threats to the government and people in Syria."

He also noted that it was a clear indication of the Qatari government’s interest in influencing the Syrian conflict.

"It is clear that the Qatari regime is seeking with this interview, with the head of a terrorist group as listed by the UN Security Council, to clean up the image of Nusra Front," he said.

A History of Manipulation

This isn’t the first time that the Qatari network has faced criticism for its slanted coverage of the Syrian conflict. In 2012, a number of high-profile employees, including the managing director, correspondent, and producer from the Beirut office, quit over Al Jazeera’s coverage.

They alleged that the network refused to publish pictures of al-Nusra’s clashes with Assad’s government forces, and also deliberately ignored a Syrian constitutional reform referendum which saw a 57% turnout with 90% voting for change.

Other former employees have provided testimony indicating that Al Jazeera has even played a direct role in fueling the conflict. Speaking to RT, Ali Hashim, a former correspondent for the Qatari network, says he resigned because "the channel was taking a certain stance on one side."

"The activists who become journalists try to make their shows as hard as possible," Lotf told RT. "The more blood and death the higher the price."

There is also a clear conflict of interest in that al Jazeera’s Syrian coverage was led by the brother of a Syrian National Council member, as evidenced through a series of hacked emails recovered from the network’s servers. These emails were published by al Akhbar.

"[The emails] also confirmed an allegation Ibrahim had reportedly made in one of her emails," al Akhbar reports. "That Ahmad Ibrahim, who is in charge of the channel’s Syria coverage, is the brother of Anas al-Abdeh, a leading member of the opposition Syrian National Council. He allegedly stopped using his family name to avoid drawing attention to the connection."

The bias appears to have had a major impact on al Jazeera’s audience. A poll conducted by the network earlier this month shows that a confounding 81% of viewers support the self-proclaimed Islamic State terrorist group.

Al Jazeera’s credibility has been gradually sinking ever since the Syrian conflict began. A Western diplomat stationed in Doha said that the Golani interview was proof of a new push by the Qatari government to present al-Nusra as national movement.

These sentiments were echoed by As’ad Abukhalil, professor of political science at California State University, and author of the Angry Arab News Service, who spoke to Sputnik.

"Golani basically spoke of unofficial understanding that his organization has with the West," Abukhalil added. "That they will spare West of attacks provided they continue to receive Gulf arms and money, and even indirectly Western arms and money."