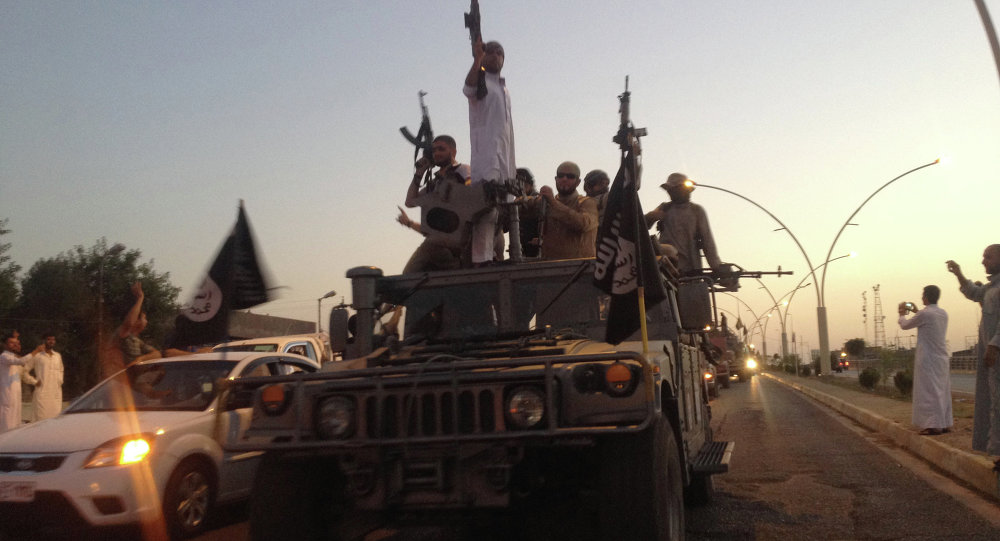 As the self-proclaimed Islamic State terrorist group continues to gain ground in the Middle East, a newly released Defense Intelligence report shows that the US was fully aware of the dangerous consequences of its involvement in the Syrian Civil War. By arming “moderate” rebels, Washington knew it might then create a group of Salafist extremists.

© AP Photo / Militant website
How US Obsession With Assad Overthrowing Led to Rise of ISIL in Syria
By January of 2014, weapons had already been secretly flowing from the Pentagon to Syria’s moderate opposition forces for months. These included small arms and anti-tank rockets. The supply had been approved by the US Congress behind closed doors, after lawmakers expressed confidence that arms stockpiles were not being transferred to extremists. This certainty was renewed in February of this year, when the US began shipping additional weapons to moderate forces, including pickup trucks, mortars and additional small arms.

"The goal for the train and equip program is to build the capabilities of the moderate Syrian fighters to defend the Syrian people," Cmdr. Elissa Smith, a Pentagon spokeswoman, said in a statement.

© AP Photo / Manu Brabo
ISIL Takes Control of Muammar Gaddafi’s Hometown in Libya
The US government had no way of knowing that those arms supplies would, in fact, aid the extremist Islamic State, which rose from the wreckage of the wars in Syria and Iraq. Washington had no way of predicting that Islamic State fighters would get their hands on the massive weapons stockpile left in Ramadi, Iraq, where "a half dozen US tanks were abandoned, a similar number of artillery pieces, a large number of armored personnel carriers, and about 100 wheeled vehicles – like Humvees," according to Pentagon spokesman Col. Steve Warren.

But according to new documents from the Defense Intelligence Agency, obtained by Judicial Watch, the United States knew all too well that arming moderates would actually result in the arming of extremists, but looked the other way in the interest of undermining the Assad regime.

For starters, the documents show that the Pentagon was fully aware of al-Qaeda’s key placement within the Syrian opposition.

"AQI supported the Syrian opposition from the beginning, both ideologically and through the media."

The report then shows that the Pentagon was briefed on the rise of the Islamic State.

"If the situation unravels there is the possibility of establishing a declared or undeclared Salafist principality in eastern Syria (Hasaka and Der Zor), and this is exactly what the supporting powers to the opposition want, in order to isolate the Syrian regime," reads the DIA report, dated August of 2012.

The documents also point out the opposition’s refuge in the chaos of the Iraqi borderlands.

"The opposition forces will try to use the Iraqi territory as a safe haven for its forces taking advantage of the sympathy of the Iraqi border population, meanwhile trying to recruit fighters and train them on the Iraqi side…" the report reads.

The documents also make mention of the possible collusion between various terrorist groups in the region.

"ISIL could also declare an Islamic State through its union with other terrorist organizations in Iraq and Syria, which will create grave danger in regards to unifying Iraq and the protection of its territory."

Yet, even with these predictions, the United States government went ahead in arming the so-called moderate factions. Whether this was a gamble on the part of US intelligence, or a show of solidarity with allies who have knowingly funded the Islamic State – like Saudi Arabia, Kuwait, and Qatar – is impossible to say.