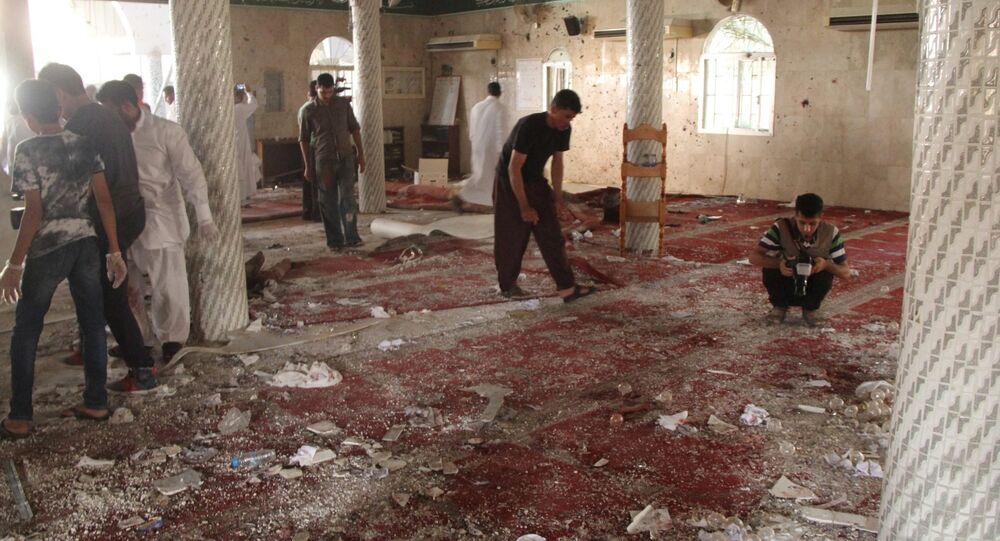 Saudi Arabian interior ministry announced that the suicide bomber who carried out a deadly attack on a Shia mosque in the country's Eastern Province, killing over 20 people, has been identified as a Saudi national linked to ISIL radicals.

MOSCOW (Sputnik) – The suicide bomber who carried out a deadly attack on a Shia mosque in Saudi Arabia's Eastern Province, killing over 20 people, has been identified as a Saudi national linked to ISIL radicals, the country's interior ministry announced in a statement.

"His name was Salih bin Abdulrahman Salih Al Ghishaami, a Saudi national. He was wanted by security services for belonging to a terrorist cell receiving directions from Daesh [ISIL] abroad," the Saturday statement, carried by the official Saudi Press Agency, said.

According to the Saudi interior ministry, the cell was discovered last month and all of its 26 members, arrested by the authorities, have been identified as Saudi nationals.

Twitter / Conflict News
Houthis Denounce Terrorist Attack on Shia Mosque in Saudi Arabia
The attack on the Shia mosque in the village of Qadeeh, located in the Qatif governorate of the Eastern Province, took place on Friday, killing 21 people and injuring more than 100. The Saudi branch of the ISIL militant group claimed responsibility for the suicide bombing.

Immediately after the explosion, Qadeeh's residents organized a spontaneous protest, blaming the Saudi authorities for the failure to ensure the security in the Saudi Eastern Province, populated by the country's Shiite minority.

Sunni and Shia are two branches of Islam, with Sunnis being the majority in most Muslim communities.