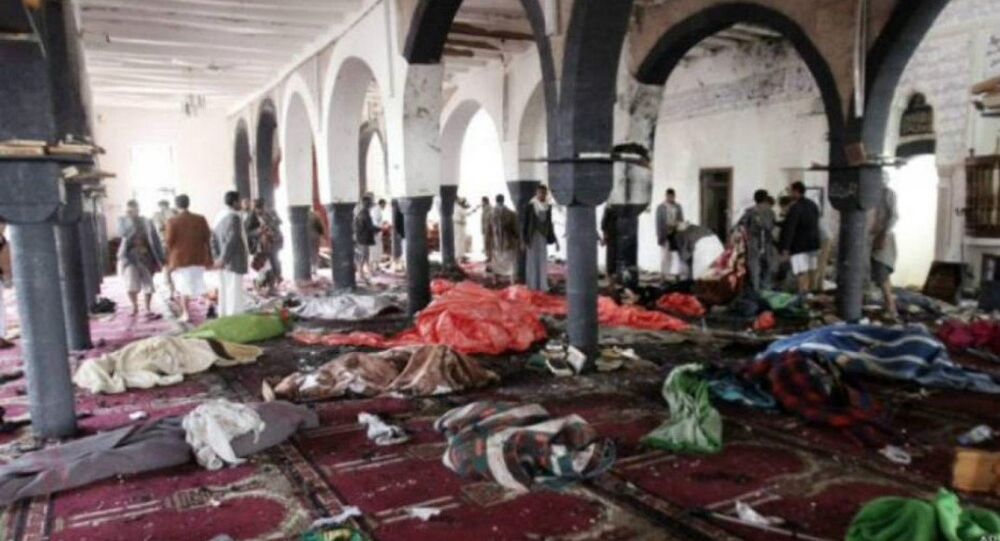 A suicide bomber detonated explosives during prayers at a Shia mosque in the village of Qadeeh, Qatif province, killing 21 people and injuring more than 100 on Friday. Saudi branch of the Islamic State (ISIL) militant group claimed responsibility for the suicide bombing.

"Criminal groups aim at undermining the security and stability of the Saudi people, acting in the interests of certain political groups and realizing their criminal plans. A policy of inter-religious and inter-tribal strife, being carried out by the Saudi authorities, indulge the actions of these groups run by international intelligence services," the Houthis said in a statement as quoted by the Lebanese Al-Manar television channel.

© AFP 2021 / HUSEIN RADWAN
Mass Protests Begin Against Saudi Authorities Following Terrorist Attack
The Shiite rebels, fighting in Yemen against the forces loyal to President Abd Rabbuh Mansur Hadi, backed by Riyadh, stressed that the attack was directed against the part of the Saudi people, striving for freedom, justice and equality.

Immediately after the explosion, Qadeeh’s residents organized a spontaneous protest, blaming the Saudi authorities for the failure to ensure the security in the Saudi Eastern Province, populated by the country’s Shiite minority.

The Qatif region of the oil-rich Eastern Province were a center of protests against Shia minority’s discrimination in 2011.