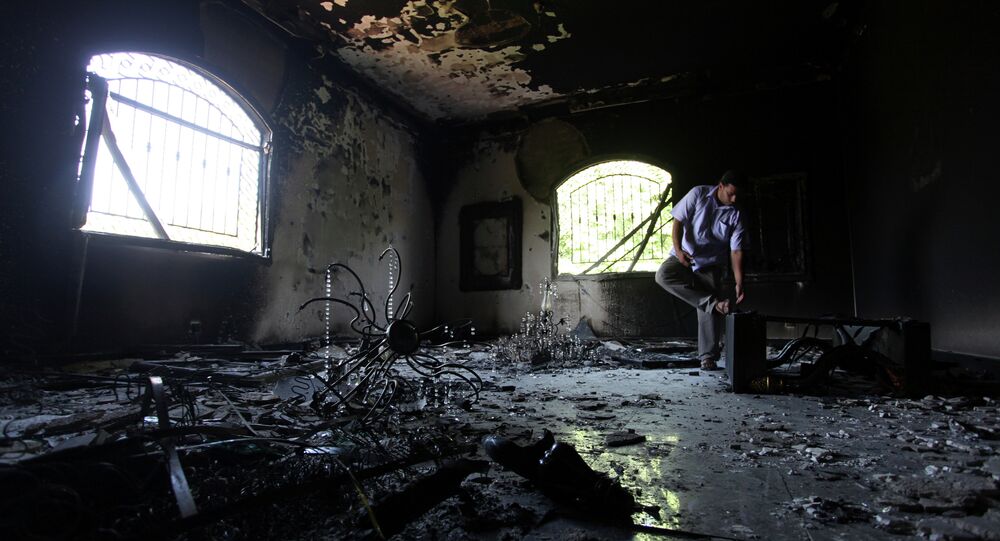 A Defense Intelligence report recently obtained by a watchdog group has uncovered surprising new facts about the 2012 Benghazi attack. Despite claims from the Obama administration, senior officials had closely monitored the shipment of weapons to Syria through Libya - arms which could have directly aided in the attack.

"The attack was planned ten or more days prior on approximately 01 September 2012," the documents read. "The intention was to attack the consulate and to kill as many Americans as possible to seek revenge for US killing of Aboyahiye ((ALALIBY)) in Pakistan and in memorial of the 11 September 2001 attacks on the World Trade Center buildings."

That document was dated only one day after the attack on the American diplomatic compound in Benghazi, at a time when top US officials insisted that the attack was a spontaneous reaction to an anti-Muslim video which had been posted online.

This also contradicts the White House’s claims that the date of the attack was a coincidence.

"The Obama administration says it was a coincidence that it occurred on 9/11," Judicial Watch President Tom Fitton told Fox News. "In fact, their intelligence said it wasn’t a coincidence and in fact the attack occurred because it was 9/11."

But even more shocking is the fact that US officials were monitoring the shipment of weapons through Benghazi to Syrian rebels.

"Weapons from the former Libya military stockpiles were shipped from the port of Benghazi, Libya to the Port of Banias and the Port of Borj Islam, Syria. The weapons shipped during late-August 2012 were Sniper rifles, RPG’s, and 125 mm and 155 mm howitzer missiles," reads a DOD document from October, 2012.

Questions about the US knowledge of weapons shipments through Libya have been consistently avoided by administration officials. During Hillary Clinton’s congressional testimony on Benghazi, Senator Rand Paul raised the question directly.

"It’s been in news reports that ships have been leaving from Libya and that they may have weapons," Paul said. "And what I’d like to know is, that annex that was close by, were they involved with procuring, buying, selling, obtaining weapons and were any of these weapons being transferred to other countries?"

"I do not know," Clinton said. "I don’t have any information on that."

The new documents could prove problematic for Clinton as she moves forward with her presidential campaign.

The Benghazi attack occurred on September 11, 2012, when Islamic extremists attacked the US diplomatic compound. The attack left two dead, including US Ambassador J. Christopher Stevens. A second attack at a separate compound ended in the death of two CIA contractors.

Last week, investigative journalist Seymour Hersh wrote a piece for the London Review of Books, claiming that the US fabricated its account of the raid that killed Osama bin Laden. While his story has been viciously attacked by the mainstream media, major details of Hersh’s story were confirmed by various US and Pakistani officials.

If Hersh’s report lent credibility to Americans’ distrust of their government, these new DIA documents may add more fuel to the fire.