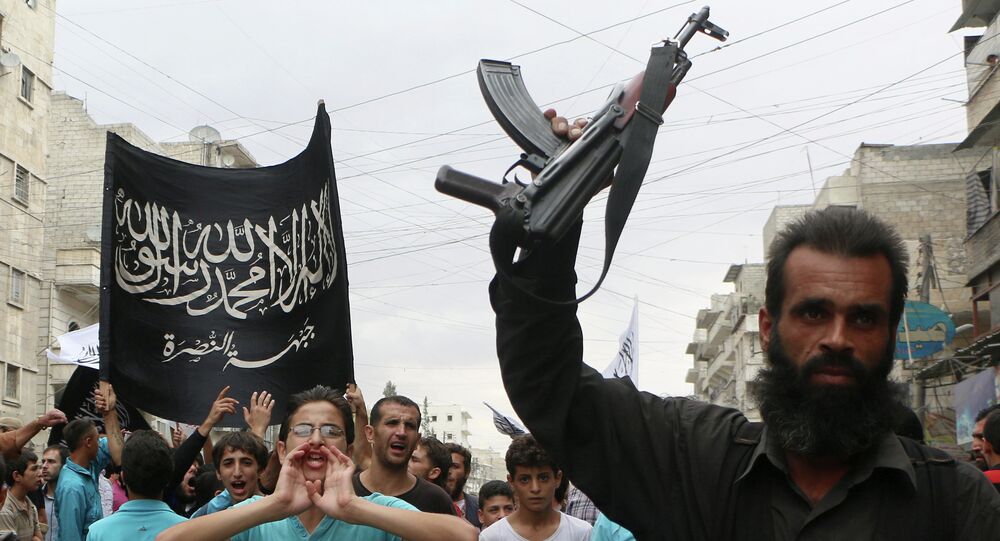 The Al-Nusra Front, al-Qaeda's offshoot in Syria, asked its enemy, the Islamic State, for help after suffering a series of defeats in the Qalamoun mountain range, a 100-kilometer (60-mile) area of strategic importance for the militants.

Both radical groups have been engaged in a months-long fight against government forces in Syria and often each other. The al-Nusra Front opposes brutal tactics the Islamic State has become notorious for, although both groups seek to overthrow Syrian President Bashar Assad and were once allied.

© AP Photo / Al-Nusra Front Twitter page
Rebels Backed by CIA Join al-Qaeda in Fight Against Assad in Syria
Clashes between al-Nusra Front militants and the Syrian army assisted by Hezbollah fighters in the Qalamoun on the border between Syria and Lebanon have plagued the region for months.

The militants need control over the area to secure routes into Lebanon they could then use to restore supplies, including weapons and fighters, or infiltrate the country.

Last week, the Syrian army and the Lebanon-based Shia movement launched a successful offensive to push al-Nusra Front away from the border. Syrian forces reportedly managed to secure several key areas in the region, killing dozens of Al-Nusra Front fighters.

During the offensive Abu Malik al-Teli, heading al-Nusra forces in the region, urged senior IS militants to come to the aid of the al-Nusra-led Jaysh al-Fatah coalition in the area around the town of Assal al-Ward, the Fars news agency reported, citing a source close to the brutal Sunni group.

Al-Nusra approved the deployment of #ISIS militants in the ongoing battle for the #Qalamoun area against Hezbollah pic.twitter.com/82RKPj0ghw

The media outlet did not specify whether the Islamic State agreed to help al-Nusra but on May 7 the government forces announced that they had pushed militants out of Assal al-Ward.

Jaysh al-Fateh declares war on ISIL in Qalamoun. In the past, ISIL & Nusra cooperated on that front and coexisted while fighting elsewhere.

The Lebanese army has also stepped up its presence in the area. Although it does not take part in the offensive, the military is reported to have warded off several militant attacks.

Lindsey Graham: Everything That Starts with ‘Al’ in Middle East is Bad News