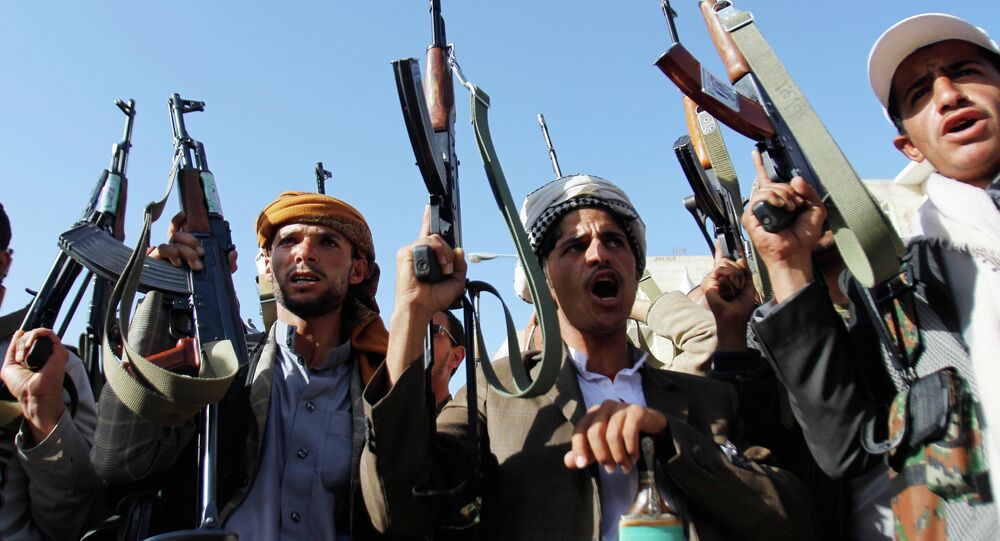 Houthi rebels shared a video that allegedly shows the Yemeni Shiite rebels saluting after shooting down a Moroccan aircraft which took part in the Saudi-led coalition's air campaign against them.

According to the Houthis’ news channel al-Masirah'a broadcast, anti-aircraft weapons had downed the Moroccan F-16 jet fighter over the northwestern province of Saada.

#Houthi militiamen sharing photos of #Morocco F-16 jet that they claim to have shot down near #Saada #Yemen pic.twitter.com/4eqcXUVlE7

The channel showed armed men standing on a hillside and saying: “Death to America!” One Houthi rebel had a piece of what is believed to be a plane's wreckage in his hands. “God felled this plane. Even though our weapons are basic and modest, we’ll shoot down all their planes, God willing,” he said as cited by Reuters.

However, Morocco has not confirmed the video yet.

© Sputnik / Aleksandr Kovalev
Jet Fighter From Saudi-Led Coalition Goes Missing in Yemen
Meanwhile, a Houthi Twitter account published photos of what it said was the body of one of the pilots, however, the report has not been verified yet.

According to a Moroccan Royal Armed Forces statement, the F-16 jet fighter went missing on Sunday. The pilot of a second jet in the same squadron didn't manage to see if the pilot had ejected.