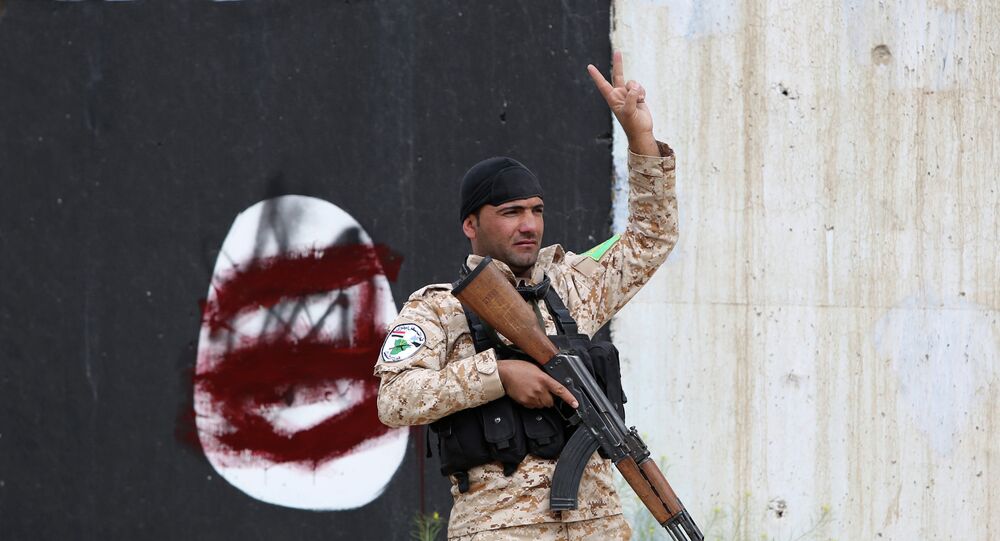 Around 1,100 Sunni fighters from Anbar province have joined a militia set up by the Iraqi government aimed at fighting the Islamic State with a cross-sectarian force.

© AP Photo / Hussein Malla
Congressional Proposal to Arm Kurds May Strain US Relations with Iraq
The first group of Sunni recruits to Iraq's anti-Islamic State militia was enlisted on Friday in a ceremony in Anbar province, as the Iraqi authorities seek to broaden the battle to include Sunni fighters in what has been a largely Shiite-led effort to date.
© AFP 2020 / ALI AL-SAADI
US Military Personnel Stole at Least $50M During Iraq and Afghanistan Wars
The ceremony took place at an army base in Amriyat al-Fallujah, close to the city of Fallujah, which the Iraqi authorities lost control of last year to ISIL forces.

In April it was reported that ISIL had taken control of a water dam and surrounding military barracks in western Anbar province, and had carried out an offensive on Anbar's provincial capital, Ramadi. The ISIL attack followed a successful campaign by Iraqi government forces to recapture Tikrit last month, which had been under ISIL control since last summer.

"Let this day be the day when we declare a massive revolution against ISIL," Anbar Governor Sohaib Al-Rawi told the recruits at the parade, which was attended by military representatives, tribal leaders and politicians. "Your country has been stolen by a bunch of thieves and thugs and you must fight to take it back."

We in #Anbar belong to a country called #Iraq and we are committed to its unity and sovereignty.

The ceremony marked the soldiers' official entrance into Iraq's 'Popular Mobilization Force,' which the authorities plan will comprise 6,000 troops in Anbar, enlisted after a vetting process.

Some of those at Friday's ceremony had been fighting ISIL in Anbar without pay or government-issued firearms; under the terms of the initiative from the Baghdad government led by Prime Minister Haider al-Abadi, the recruits will receive weapons from the government and a salary of around $650 dollars per month.

Haider al-Abadi, a Shiite, took office in September 2014, and the Popular Mobilization units are part of his government's plan to fight the ISIL threat by building a more inclusive, cross-sectarian coalition of forces. In a statement last month, al-Abadi stressed "the importance of enrolling additional tribal fighters in the fight against ISIL as part of the Popular Mobilization Forces," and the integral role of local populations in liberating their own areas.