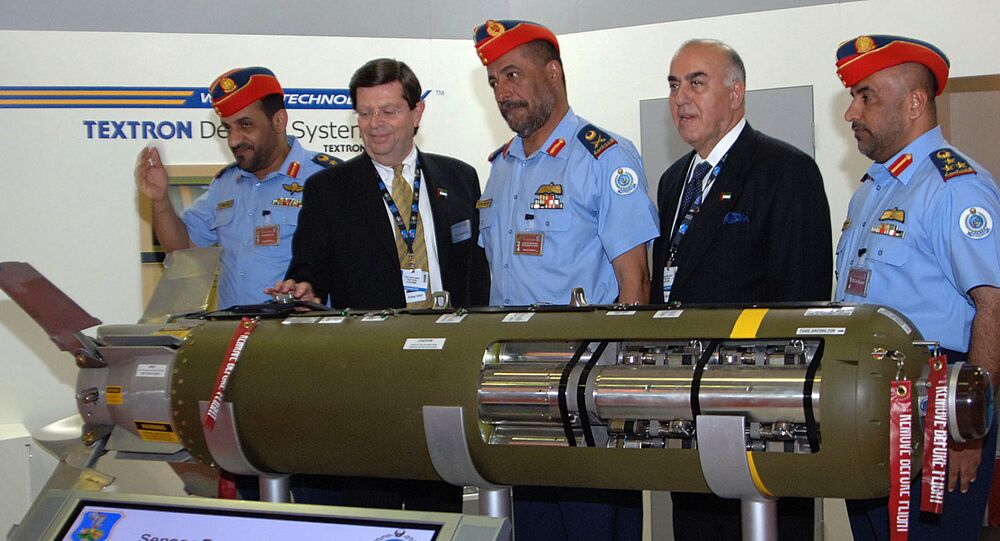 Citing video and photographic evidence, the watchdog slammed Riyadh and Washington for resorting to ‘inhumane' forms of war.

Human Rights Watch obtained a video and photographs that allegedly indicate the use of cluster munitions in attacks on a Houthi stronghold in Yemen's Saada governorate on the border with Saudi Arabia.

The video shows strange objects parachuted from the sky on April 17.

Analyzing the photographs taken and provided by a Saada resident on the same day, the watchdog identified the banned CBU-105 Sensor Fuzed Weapons with submunitions, manufactured by US Textron Systems Corporation and shipped to Saudi Arabia in compliance with a 2013 contract.

Types of bombs being parchuted by Saudi warplanes in Saada N #Yemen pic.twitter.com/jA8kRA9t9d

Using satellite imagery, the watchdog found out that the alleged cluster bombs were dropped on a cultivated plateau near a populated village.

© Photo : Human Rights Watch
A Human Rights Watch graphic produced from a video uploaded to YouTube on April 17, 2015 shows munitions with distinctive white parachutes descending in Al-Shaaf, in Saqueen in the western part of Saada governorate, indicating the use of CBU-105 cluster munitions

"Saudi Arabia and other coalition members — and the supplier, the US — are flouting the global standard that rejects cluster munitions because of their long-term threat to civilians."

Cluster munitions are either ground-launched or air-dropped explosives that disseminate a cloud of bomblets targeting vehicles and personnel. Those indiscriminate weapons can blanket a wide area and thus result in unplanned civilian casualties. Moreover, some of the bomblets do not go off at once and become landmines.

© AP Photo / Hani Mohammed
US Accelerating Arms Shipments to Saudi Offensive in Yemen as Casualties Mount
Due to this danger, 116 countries have signed a 2008 Convention on Cluster Munitions banning the use and transfer of these weapons. Neither Saudi Arabia nor the United States are parts to the treaty.

Since March 26, a Saudi-led international coalition has been conducting airstrikes on positions of the Yemeni Houthi faction that took control of large areas across the country. The operation began upon the request of Yemeni President Hadi who had been forced to flee from the country.

US Expedites Military Equipment to Saudis, UAE for Yemen Offensive