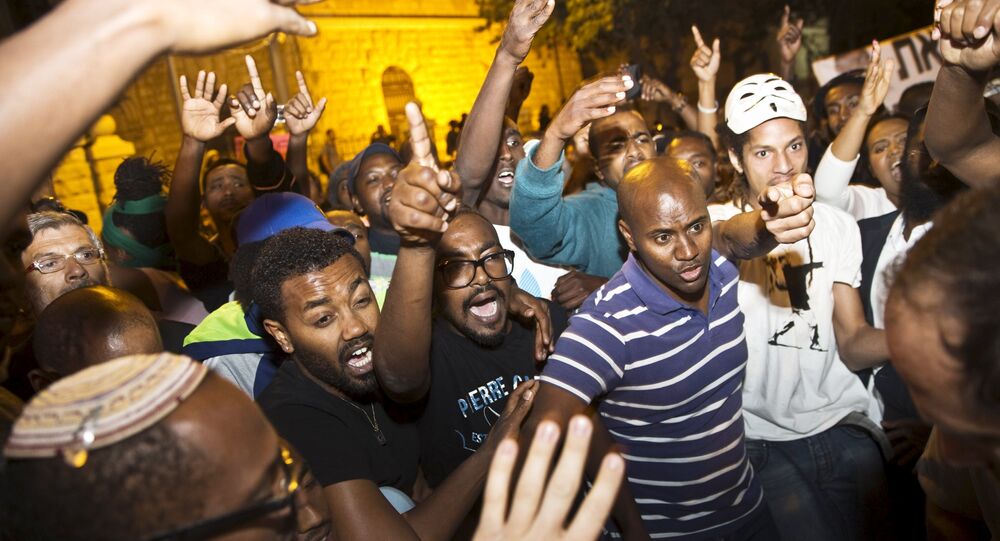 A demonstration against police brutality in Jerusalem has reportedly turned violent after law enforcers used force to disperse hundreds of protesters, including Israelis of Ethiopian descent.

Police used water cannons, tear gas and stun grenades to disperse a demonstration against police brutality targeting Israeli Jews of Ethiopian origin in Jerusalem on Thursday evening. At least 13 people were injured, with two police officers and five protesters taken to hospital, according to the Magen David Adom ambulance service.

The use of what protesters deemed to be "disproportionate force" during the demonstration was reportedly aimed at keeping angry crowds away from the residence of Israeli Prime Minister Benjamin Netanyahu, who was quick to condemn the violence.

"I unequivocally condemn the striking of the soldier from the Ethiopian community and those responsible will be brought to justice, but nobody has the right to take the law into their own hands," Netanyahu said.

He added that "immigrants from Ethiopia and their families are dear to us and Israel is making great efforts to ease their integration in society."

© AP Photo / Matt Rourke
Baltimore Uprising: State Halts Civil Rights Protections for Those Arrested
The Thursday rally saw some protesters carrying banners that read "Enough to police violence" and "Gestapo" with an Israeli police emblem next to the inscription. Other protesters said that streets "must burn like in Baltimore".

More than 120,000 Ethiopian Jews have come to Israel since chief rabbis determined in 1973 that their Jewish community had biblical roots.

Despite the fact that some Israelis of Ethiopian origin managed to get jobs in the Israeli parliament and the military, complaints of discrimination against Ethiopian Jews are not uncommon.