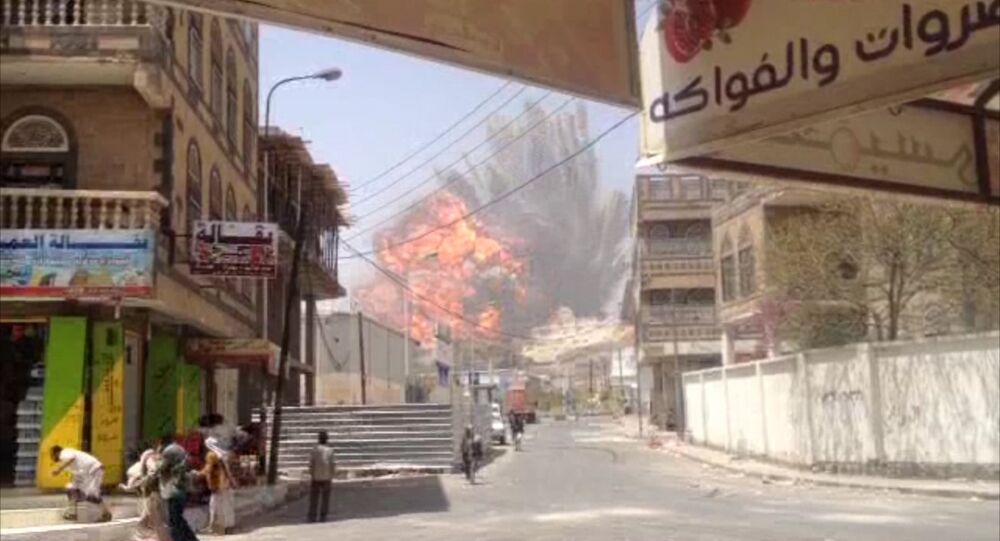 UN Secretary General Ban Ki-moon is calling for an immediate resumption of fuel imports to Yemen and is urging all parties to the country's internal conflict to ensure that humanitarian aid can be safely delivered to those affected by the violence.

UNITED NATIONS (Sputnik) – In April, the UN Security Council voted in favor of an arms embargo against the Houthis, a militant group that has seized parts of Yemen, including the capital Sanaa, forcing Yemeni President Abd Rabbuh Mansur Hadi and his government to resign in January.

Earlier this week, the United Nations' outgoing special adviser on Yemen Jamal Benomar warned that the arms embargo could restrict the flow of highly needed humanitarian aid and fuel to Yemen, where Houthi rebels continue to fight against pro-Hadi forces.

"The Secretary-General calls on all parties to ensure that humanitarian agencies and their partners have safe and reliable access to bring aid workers and supplies into Yemen and to deliver aid to millions of people in need," the United Nations said in a Thursday statement.

According to the statement, violence in Yemen has blocked the shipments of food, fuel and healthcare, which is making the dire humanitarian situation in Yemen even worse.

"All airports are closed to civilian traffic — some have come under direct attack — and naval shipments are being delayed. Yemen's health, water and sanitation systems and telecommunications services are on the brink of collapse. Humanitarian operations will end within days unless fuel supplies are restored," the United Nations stressed.

According to UN data, over 1,200 people have been killed, while 300,000 have fled their homes in Yemen in the past six weeks, amid continuing ground fighting, aerial bombardments and sniper attacks on civilians.

"Attacks on civilians and civilian infrastructure, including hospitals, humanitarian warehouses and UN compounds, are unacceptable and in violation of international humanitarian law," the United Nations said in its Thursday statement, calling for an "immediate" ceasefire in Yemen.