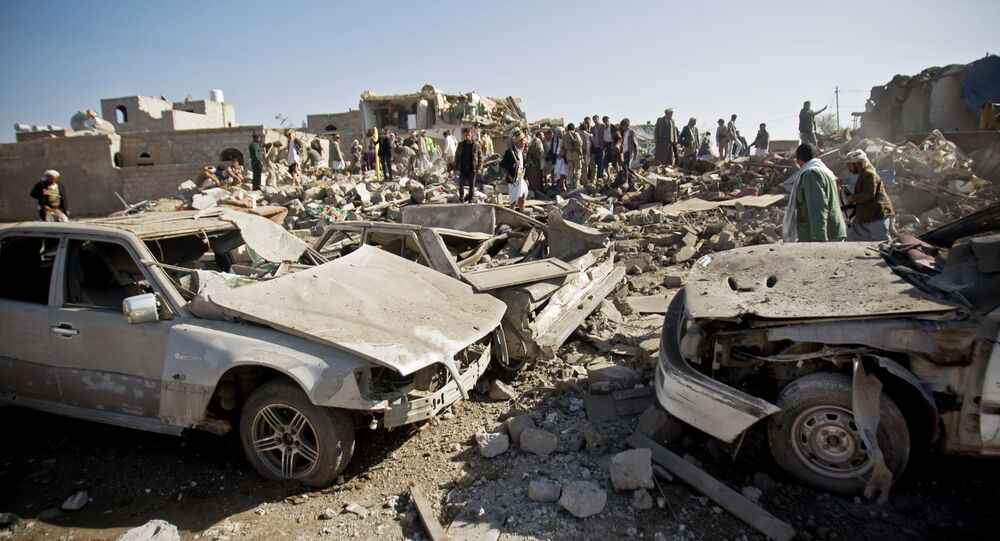 Saudi Arabia’s military involvement in the Yemen conflict, supported by the United States, is a serious violation of the laws and the UN charter, according to Iranian political expert Hassan Hanizadeh.

“All these actions are a serious violation of the laws and the UN charter. Closure of the airspace above Yemen is a violation of the UN member country’s sovereignty. Saudi Arabia must be sued in the International Court for its violation of the international norms and for military crimes against another state,” Iranian political scientist and news agency MehrNews editor-in-chief Hassan Hanizadeh said.

Earlier this month, the United States claimed that Iranian warships were carrying arms to Houthi militants in Yemen. Tehran has denied the accusations. Washington sent an aircraft carrier and a guided missile destroyer to Yemen, claiming that the move is linked to instability in the war-torn country.

© AP Photo / SPA
Saudi National Guard to Take Part in Coalition Operation in Yemen
“The United States always acts in the region so that innocent people’s blood flows in the countries suffering from the military conflicts, human rights are violated… Now they [the United States] mobilized their navy. We will see new crimes against humanity by the United States’ armed forces,” political analyst Sabah Zanganeh told Sputnik Persian.

Zanganeh added that the main goal of the United States is to gain access to the Yemeni oil resources. To achieve this goal, Washington is ready for any type of the military operation, the expert added.

Yemen is suffering from a military confrontation between government forces and Houthi militants who have seized control of the capital Sanaa and several other cities.

In March, a coalition headed by Saudi Arabia launched a military operation against Houthi positions in Yemen, at the request of President-in-exile Abd Rabbuh Mansur Hadi. The United States provides intelligence, targeting and logistical support to the coalition.