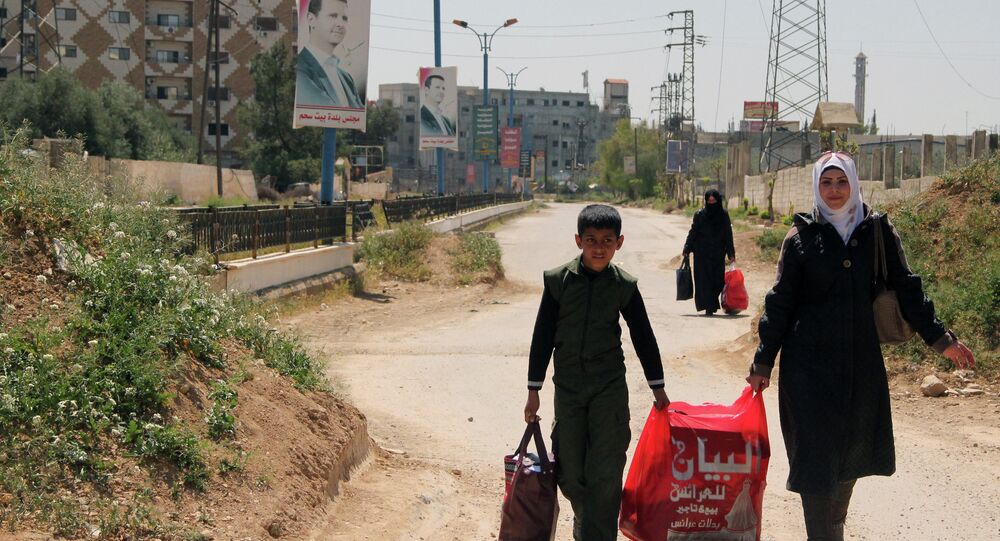 The UN Relief and Works Agency sent its fourth humanitarian assistance mission to the Yarmouk camp.

UNITED NATIONS (Sputnik) – The UN Relief and Works Agency (UNRWA) sent its fourth humanitarian assistance mission to the Yarmouk camp for Palestinian and Syrian refugees in Syria, the agency said in a situation report.

"UNRWA continued to its humanitarian response to the Yarmouk crisis today, with a fourth distribution mission to Yalda providing humanitarian assistance to 1,000 families affected by the crisis. UNRWA medical personnel established a mobile health point, treating 153 patients over the course of the day," UNRWA said Thursday.

© Sputnik / Dmitriy Vinogradov
Almost Half of Yarmouk Refugee Camp in Syria Freed From ISIL – PFLP
According to the agency, civilians at the camp are highly vulnerable, with more than 18,000 Palestinians and Syrians lacking basic humanitarian needs. More than 95 percent of Palestinian refugees rely on UNRWA to meet their needs of food, water and healthcare, the agency said.

Earlier this month, Islamic State militants seized over 90 percent of the camp. According to Central Committee of the Popular Front for the Liberation of Palestine, almost half of the camp has been liberated from the militants.