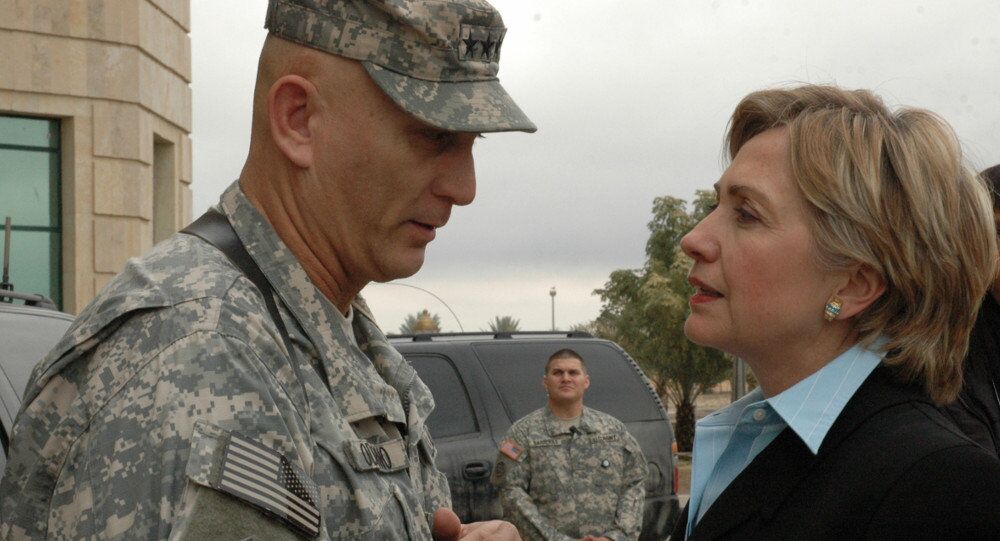 US Presidential hopeful and former American foreign policy chief Hillary Clinton has been accused of implementing a "dysfunctional" diplomatic operation in Iraq during her years as Secretary of State, which, according to a new book, ultimately allowed the country to slip back into civil war.

Former British diplomat Emma Sky, who served as an advisor to one of the US' leading commanders in Iraq, claims that a series of measures undertaken by the US contributed to renewal in sectarian violence in the country.

The book, due out next month, titled 'The Unraveling: High Hopes and Missed Opportunities in Iraq' is highly critical of the Obama administration's efforts in the region, saying that the US was too focused on securing a quick exit from the country, instead of securing Iraq's long-term stability.

Quick US Exit and Poor Decisions Led to Civil War

With public and political pressure on the US to secure a quick exit of its armed forces from Iraq, the book takes aim at then Secretary of State Hillary Clinton's decision to appoint Chris Hill to the position of US ambassador to Baghdad, given his lack of experience in the Middle East.

Ms Sky claims the appointment of Hill, who was persuaded into the role by Hillary Clinton, and the prompt US withdrawal from Iraq in 2011, undid some of the previous efforts made to dampen sectarian tensions between Shias and Sunnis, and secure long-term peace in the country.

"That war — and the manner in which the United States left it behind in 2011 — shifted the balance of power in the region in Iran's favor," she wrote in an article adapted from her book, titled 'How Obama Abandoned Democracy in Iraq' in Politico magazine.

"Regional competition, of which Iran's tension with Saudi Arabia is the main but not only dimension, exacerbated existing fault-lines, with support for extreme sectarian actors, including the Islamic State, turning local grievances over poor governance into proxy wars."

Ms Sky, who worked alongside US General Ray Odierno in Iraq, says the general had told her in 2010 that his "greatest fear" was that the US would "stabilize Iraq, then hand it over to the Iranians in our rush to the exit."

In Senate, @HillaryClinton's most consequential vote was in '02 for a res authorizing W. to launch Iraq war. More: http://t.co/Xwh5Ij9aND

"I've invested too much here," he said, "to simply walk away and let that happen."

However, Sky claims that General Odierno was losing faith in the leadership of Chris Hill, who she believes "made clear how much he disliked Iraq and Iraqis."

The book also takes aim at the lack of foreign policy focus shown by Washington during Iraq's 2010 elections, which ultimately led to Prime Minister and pro-Shia leader Nouri al-Maliki being given the US' support to stand as leader in a coalition government for another term.

Ms Sky says the "seeds of Iraq's unraveling were sown in 2010," when the US Vice-President Joe Biden came to Iraq and said the White House would be willing to support Maliki as PM for another term, instead of Iraqiya party leader Rafi Issawi.

During talks with the various party leaders, US ambassador to Baghdad Chris Hill is alleged to have told a "visibly upset" General Odierno: "Iraq is not ready for democracy," adding that "Iraq needs a Shia strongman," like Nouri al-Maliki.

The book is also scathing of the involvement of US Vice-President Joe Biden, who Sky — an expert on Middle Eastern affairs — claims "could not fathom" the various subtleties and intricacies that were influencing Iraqi politics and society.

"I tried to explain the struggle between secularists and Islamists, and how many Iraqis wanted to move beyond sectarianism. But Biden could not fathom this. For him, Iraq was simply about Sunnis, Shia and Kurds."

Sky also recalled some of the unsophisticated comments made by Biden during 2010 talks with cross party leaders in Iraq, where he refused to take into account Iraq's unique history of sectarian divisions.

"I know you people. My grandfather was Irish and hated the British," the Vice-President is alleged to have said.

"It's like in the Balkans. They all grow up hating each other."

Ms Sky lamented the lack of action taken by Clinton's foreign office and criticized the Obama administration for the way the Iraq withdrawal was handled.

"If only President Obama had paid attention to Iraq. He, more than anyone, would understand the complexity of identities, I thought — and that people can change. But his only interest in Iraq, it appeared, was in ending the war."

Obama Agrees to Help Iraq With Fight Against Islamic State

US to Provide Extra $205 Mln in Humanitarian Aid to Iraq