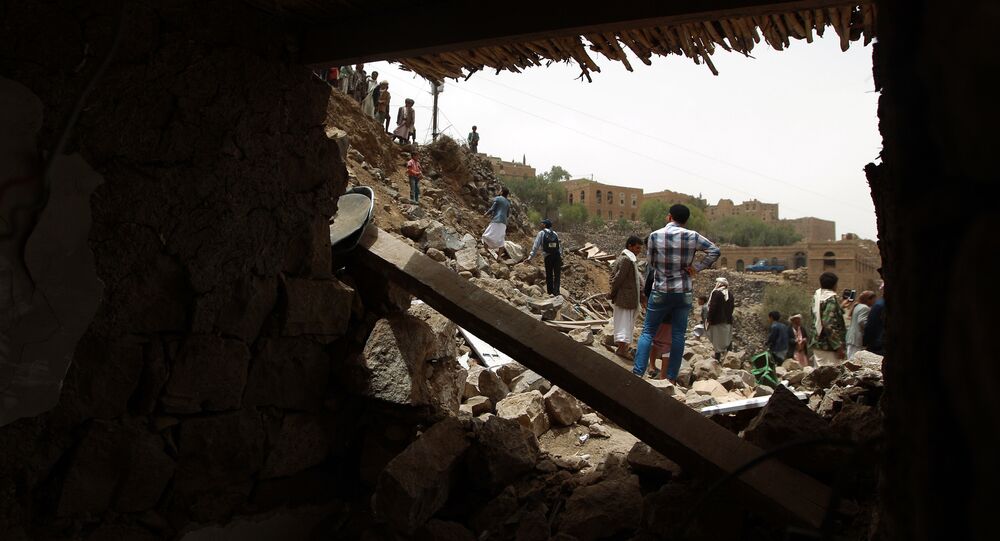 © AP Photo / Hassan Ammar
Pressure Group Urges UK to Impose Arms Embargo on Saudis Over Yemen Raids
WASHINGTON (Sputnik) — The Saudi Arabian-led military campaign against Yemen violates international law and is nothing more than aggression in an effort to assert influence over the strategically-positioned country, experts told Sputnik on Tuesday.

Boyle stressed military campaign against Yemen has nothing to do with international law.

“It is about the United States, by means of its proxies and puppets Saudi Arabia and the Gulf Cooperation Council (GCC), trying to reassert its control over Yemen because of its strategic location,” Boyle added.

© Sputnik / Naowaf Ibrahim
Over 540 Killed, 1,700 Injured in 2 Weeks of Yemen Conflict - WHO
The Shiite Houthis forced Hadi and his government to resign in late January 2015 having taken over the capital Sana in September 2014. Hadi later fled to the port city of Aden and disavowed his resignation before fleeing again to Saudi Arabia.

While not directly participating in the airstrikes, the United States is providing logistic and intelligence support for the offensive.

The coalition, has not sought authorization from the UN Security Council for the military campaign, and has justified the operation on the grounds that President Hadi requested the intervention.

Boyle explained that Hadi was placed in power the by a United States and GCC-brokered deal, no longer represents Yemen as he was ousted, resigned and fled the country in the context of a civil war.

“The only way there could be any type of lawful military intervention in Yemen is if it comes from the UN Security Council, and that so far hasn’t happened,” he said.

Boyle added that Article 2, Paragraph 7 of the UN Charter prohibits states from intervening in the internal matters of states unless there is a UN Security Council resolution authorizing military force.

© AP Photo / Hussein Malla
Houthis Capable of Attacking Saudi Arabia, Hezbollah Leader Says
Boyle also pointed out Article 53 of the UN Charter prohibits regional organizations such as the GCC or Arab League from authorizing the use of force without a UN Security Council resolution.

“All these Gulf States and the United States that are now assisting Saudi Arabia are likewise guilty of the international crime of aggression against Yemen. The Arab League and GCC have no authority to authorize military attack on Yemen,” Boyle noted.

Charles Schmitz, a specialist on Yemen at Towson University, told Sputnik the Saudi intervention was a unilateral move to assert its military power in its neighborhood without UN backing.

“This is a Saudi action designed to assert its military power independent of the US,” Schmitz said. “The Saudi attack may not be defensible on strictly legal grounds, but politically the United States, the British and the French are going to back the Saudis in the UN Security Council.”

© AP Photo / Yassir Hassan
Coalition Planes Drop Arms for Pro-Hadi Forces in Yemen's South
However, Russia and China, the other two permanent members of the UN Security Council, have questioned the legality of the military operation and called for a ceasefire to allow humanitarian aid to enter the country.

On Monday, Russian Foreign Sergei Lavrov said that without a UN Security Council resolution the Saudi military foray into Yemen is illegal.

Boyle noted, however, that Saudi Arabia, the GCC countries and even the United States could be held accountable for war crimes for the death of civilians, and for not allowing humanitarian supplies to enter the country.

Hundreds of civilians have been killed — including in airstrikes targeting a UN monitored refugee camp — as the Red Cross has called for a ceasefire amid warnings of a humanitarian catastrophe.

US Gov't Refuses Assistance to Nationals in Crisis-Torn Yemen