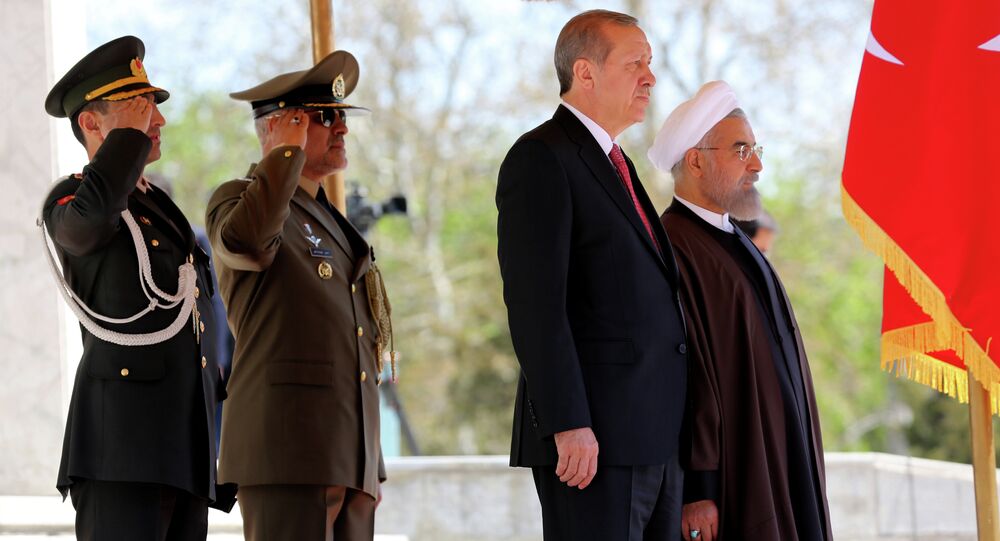 Turkey, Iran to Switch to Transactions in National Currencies - Erdogan

Turkish President Recep Tayyip Erdogan said that Tehran and Ankara agreed to use national currencies for trade between countries.

© AFP 2021
Ankara, Tehran to Discuss Discount on Iranian Gas During Erdogan Visit
ANKARA (Sputnik) — Turkey and Iran are planning to switch to transactions in their national currencies, Turkish President Recep Tayyip Erdogan said Tuesday at a press conference with his Iranian counterpart Hassan Rouhani on Tuesday.

"We do not wish to remain under the pressure of the dollar or the euro, or under the influence of their exchange rates. We have agreed that Turkish and Iranian national currencies are to be used between us. This will add extra strength to our countries," Erdogan said.

Erdogan also added that the goal of Turkey and Iran's trade turnover would amount to $30 billion. Currently their trade turnover stands at $14 billion.

Turkey first announced it had been in talks with Iran and China on local currency transactions during Erdogan's visit to Iran in October 2014.

© AFP 2021 / CHRISTOF STACHE
Iran to Become Most Inspected State Following Deal on Nuclear Program
Local currency trade can end the nations' dependence on the US dollar for commodity turnover and eliminate trade barriers that were imposed on Iran by United States and United Nations.

The curbs on the Islamic republic's banking, financial and trade sectors, among others, aimed to isolate the country for its nuclear program. Last week, Iran and world powers agreed to phase them out if a comprehensive nuclear deal is struck by July 2015.

In January, Iran's central bank said it had suspended the use of the US dollar in foreign trade transactions and was working on bilateral currency swap deals. This was followed by Moscow and Tehran's announcement that they were going to set up a joint bank account for transactions in national currencies, such as in food trade.