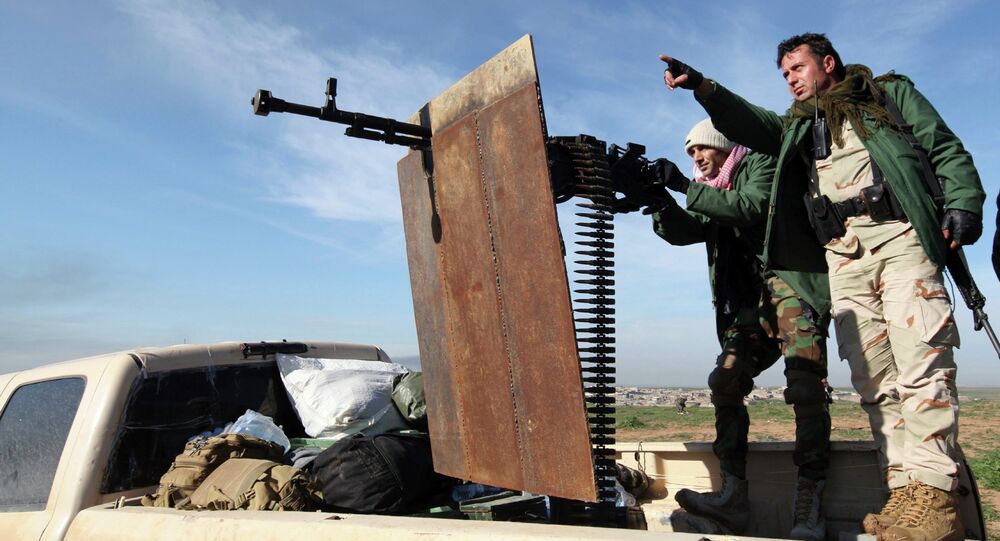 Kurdistan Regional Government (KRG) representative to the United States Bayan Sami Abdul Rahman said that he beleives US-origin weapons and equipment should be delivered direct to Irbil, the base of the Kurdish fighters.

“We want US-origin weapons and equipment and we believe it should be delivered direct to Irbil,” Rahman stated at a Bipartisan Policy Center discussion on the Kurdish role in defeating the Islamic State. “There is no need for it to go through Baghdad.”

The KRG representative noted that the Kurdish Peshmerga forces have demonstrated the political will to fight, “but we need the United States and the Coalition partners to step up the effort to deliver weapons, and the kind of weapons that we need.”

YouTube/News of the World
Iraqi Kurds Claim Islamic State Uses Chemical Weapon
At the end of 2014, US President Barack Obama authorized a $1.6 billion train and equip program with approximately $1.2 billion allotted to military equip the Iraqi Security Forces, according to the US Department of Defense. The promise of military equipment led KRG leaders to believe that US weapons would be delivered by early 2015, but “the vast majority of those weapons have not been delivered,” Rahman explained.

The Kurds have not received their “fair share” of the US weaponry delivered because of political friction between the KRG and Baghdad, Rahman said.

“The lion’s share of the fight against ISIL [Islamic State of Iraq and Syria] is being carried out by the Peshmerga,” she noted, adding that of the 250 US mine-resistant armored vehicles sent to Baghdad, the KRG received only 25.

© AP Photo / Vadim Ghirda
Peshmerga Fighters Take Key Ridgeline in Iraq - US Central Command
The US Congress has introduced legislation to sidestep the bureaucratic delays in Baghdad that have led to delays in arms shipments to the Kurdish front against the ISIL. Legislation in the US House of Representatives introduced in late March 2015 would allocate military articles directly to the Kurdish Peshmerga.

The fight against the ISIL began in August 2014, with the terrorist group seizing large portions of territory in Syria and Iraq. Since the outset of the fight, Peshmerga forces have liberated approximately 95 percent of the territory once held by the terrorists, according to statements by the KRG.