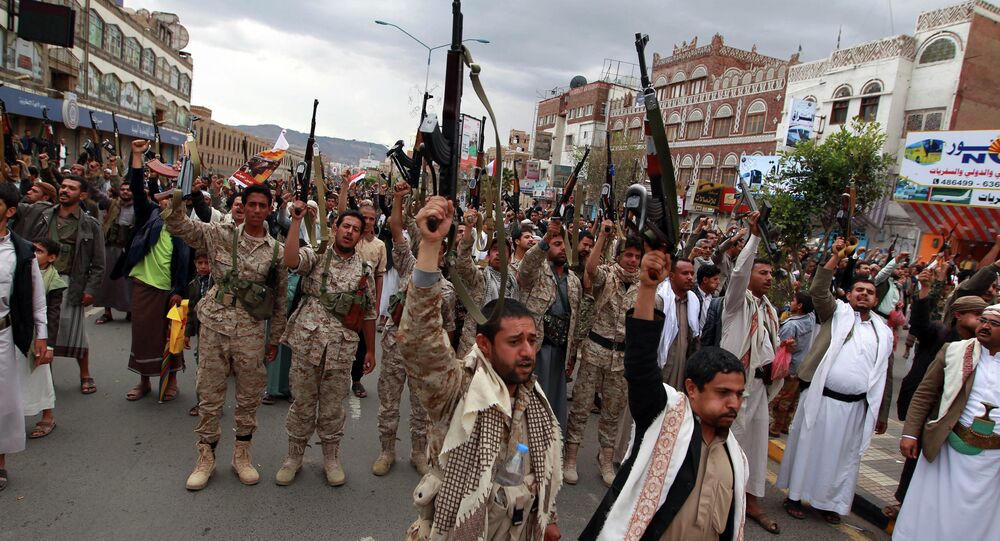 Yemen's Houthi militias continued making ground gains in Aden on Sunday, capturing the city's administration building despite the Saudi-led bombing campaign which has been attempting to contain the group.

Saudi Arabia together with other Gulf monarchies plan on proposing a resolution on Yemen at the UN Security Council on Monday which could allow for ground military intervention in the conflict.

Yemeni television reported that Houthis managed to capture the government administration building in Aden on Sunday.

The Saudi-led coalition continued its bombing campaign against the Houthis and civilian casualties have grown significantly as a result.

Witnesses have told AFP that Aden has been subject to increased bombardments overnight which increased. It is unknown if the bombardments are due to the Saudi-led campaign or the Houthi advance.

A senior Houthi leader said on Sunday that they are willing to begin peace talks if the Saudi-led coalition stops its bombing runs.

Roots of the Conflict

President Hadi was put in power in 2011 after President Saleh was ousted by a series of protests which were supported by the United States and Saudi Arabia.

Saudi Arabia seeks a UN Security Council resolution that would involve Chapter Seven of the UN Charter which allow for direct military action.

The resolution could mean the beginning of a Saudi-led ground war in Yemen. American military analyst David Des Roches said on Thursday that a ground offensive may come as the current airstrike campaign is becoming increasingly ineffective.

The conflict has also escalated Saudi Arabia's relations with Iran, which has been accused of supporting the Houthi militias.

© Flickr / Chris Bodenner
UNSC, Gulf States Hope for Results on Draft Resolution on Yemen by Monday
"We cannot allow the situation to turn into an attempt to start an open conflict between the Arabs and Iran," Russian Foreign Minister Sergei Lavrov said on Tuesday.

The conflict has also drawn in Al-Qaeda in the Arab Peninsula (AQAP), which operates in the country's southeast and has taken advantage of the power vacuum.

On Thursday, AQAP overran the from the southeastern port city of Mukalla. The group also freed one of its leaders, Khalid Saeed Batarfi, from Mukalla's prison along with 300 other inmates.