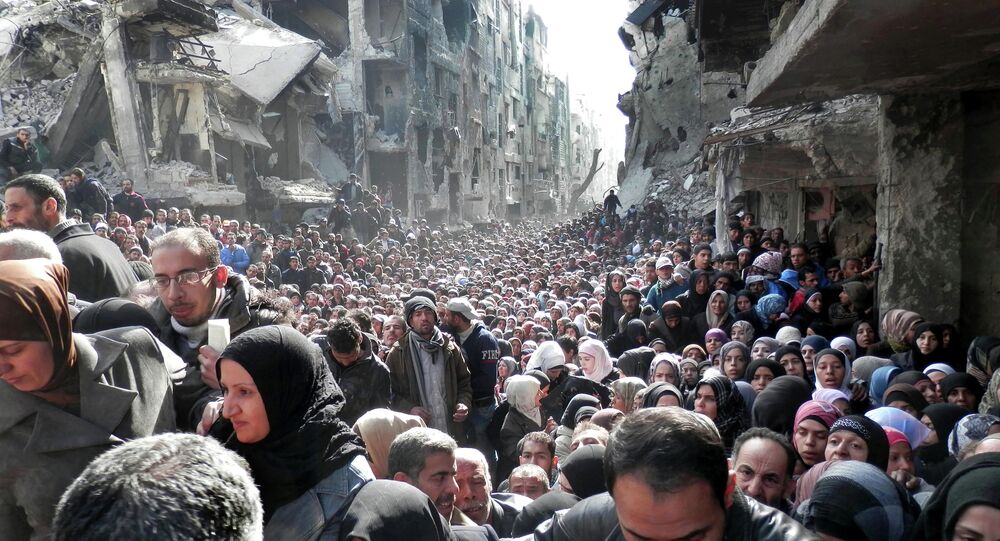 ISIL Captures Most of Yarmuk Refugee Camp in Syria

A skirmish between ISIL, al-Nusra and Palestinian faction Akhnaf Beit al-Maqdis is currently taking place there.

Yarmuk used to be a home to 160,000 Palestinian refugees in Syria before it had been caught up in the fighting for over a year and most of the residents fled.

A camp resident told Sputnik that civilians were in panic as bullets were flying in the streets of Yarmuk.

The delivery of humanitarian aid from the Syrian government, UNRWA and "Red Crescent" to Yarmuk has been interrupted as the al-Nusra militants used to fire at the humanitarian convoys.

Yarmouk Palestinian refugee camp was under siege 4over a year with ppl dying from starvation especially young/old pic.twitter.com/hNYdBN1S8m

"Fighters from IS [ISIL] launched an assault this morning on Yarmuk and they took over the majority of the camp," Anwar Abdel Hadi, director of political affairs for the Palestine Liberation Organization in Damascus, said.

"@sayed_ridha: A leader of #Yarmouk Army #FSA Majd Mohamad Al-Shareef was killed in clashes with #IS #Damascus" @JYacov

In 2014, the Islamic State took large territories in Iraq and Syria and established a caliphate. Affiliated groups operate in North Africa, Yemen, Pakistan and Afghanistan. ISIL recruits fighters from around the world.