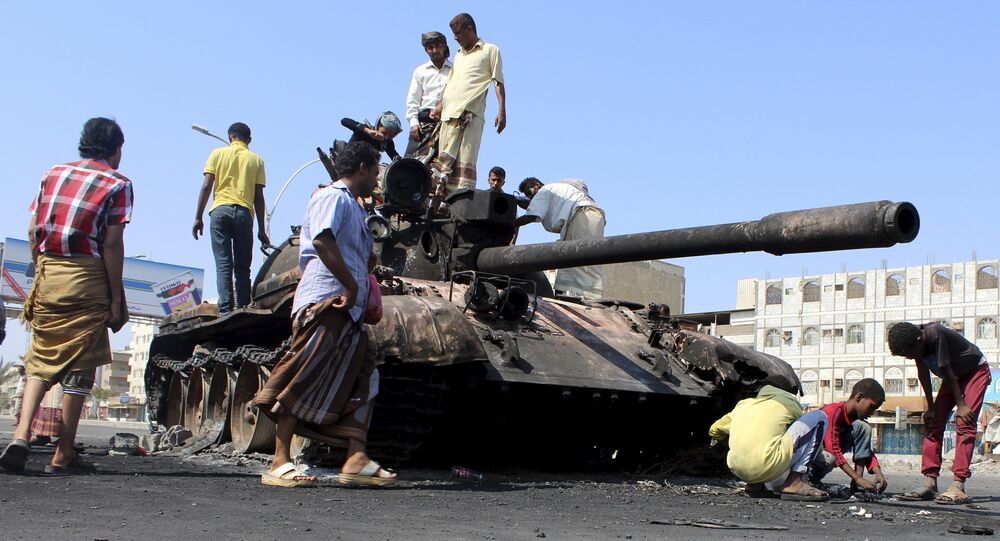 Retired Yemeni brigadier-general Muhssein Khasroof said that Operation Decisive Storm was working against the clock to suppress the Houthi uprising.

© AFP 2021 / HAMAD OLAYAN
Saudi-led Coalition May Launch Ground Operation in Yemen Within Days
CAIRO (Sputnik) — Time is running short for the Arab military operation to make a difference in Yemen as the Saudi-led coalition is unlikely to tip the power balance there without putting boots on the ground, a retired Yemeni general told Sputnik on Sunday.

He criticized the coalition's tactic of targeting rebel positions in the Yemeni capital of Sanaa and on its outskirts, while Houthis and loyalists of Yemen's former leader, Ali Abdullah Saleh, are deployed farther to the south and maintain a grip on the port city Aden.

© Sputnik
Military Operation in Yemen
Houthi militants and their allies "have already secured a foothold on the coast," meaning that the coalition's actions to blockade Yemeni sea ports had failed, Khasroof said, adding that aerial raids had only succeeded in destroying hardware of the regular Yemeni forces and the nation's infrastructure.

The military officer stressed that Operation Decisive Storm was working against the clock to suppress the Houthi uprising.

"If this operation does not produce a positive result within a week, then Yemen will turn into a quagmire that will drown Arab troops," Khasroof warned.

He voiced hope that Russia will play a positive role in solving the Yemeni crisis and help to bring all warring parties to the negotiating table.

On Wednesday night, a coalition of Arab Gulf countries and other regional powers began pounding militant targets across Yemen at the request of the ousted president. Dozens of people, including civilians have been killed over the past four nights, according to the estimates of the rebel-controlled Health Ministry in Sanaa.

President Hadi to Make Return to Yemen in Coming Days