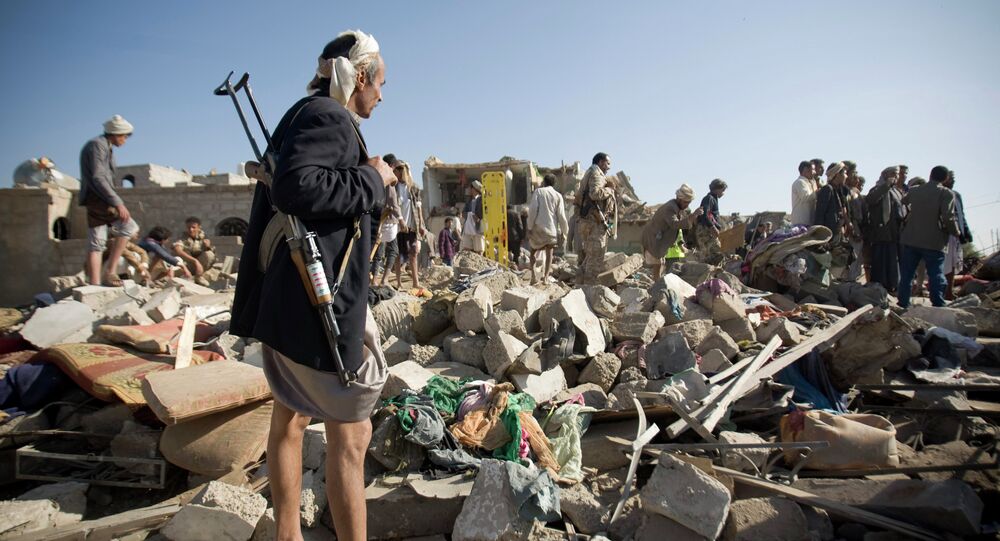 As a Saudi-led coalition of Arab states continued a military operation Thursday night against Shia Houthi rebels in Yemen, a recap of the recent events in the country that has led to the current situation.

© Flickr / RA.AZ
Saudi Arabia Unlikely to Send Ground Troops to Yemen - Experts
The operation, codenamed "Decisive Storm," is aimed at "the protection of the legitimate government in Yemen," and was requested by the country’s elected president Abd Rabbuh Mansur Hadi.

“The purpose of the operation is to assist the Yemeni people in getting rid of the Houthi rebels,” the operation’s press secretary said, adding that the strikes would continue until the operation’s objectives are achieved and rule of law is restored.

Ousted President Abd Mansour Hadi had officially asked the UN Security Council to take action to "stop the Houthis’ aggression," in accordance with Chapter 7 of the UN Charter. He also addressed the Arab League, urging them to send "Peninsula Shield" troops — Gulf states’ military units — and to declare a no-fly zone over airspace controlled by the Houthis.

Meanwhile, any attempt to establish a national dialogue has failed, and parties to the conflict blame one another for the conflict.

Houthi forces have recently captured nearly the entire Lyahadzh area, near the city of Aden. They were rebuffed from invading the city and seizing its airport by the "southern people's militia" that supports the President Hadi.

Aden is the second largest city in Yemen. President Hadi declared it the country’s temporary capital in early March.

Houthi forces have surrounded Lyahadzh’s Al And, a strategically important military base and one of the most fortified on the Arabian Peninsula. It was built by Soviet troops when the country was known as the People's Democratic Republic of Yemen, or South Yemen.

It is worth noting that US and British troops withdrew from this base earlier this month, as for years it was used to launch drones to attack the positions of al-Qaeda forces.

After a bloody terrorist attack in Sanaa on March 20, Houthi leader Abdel-Malek Al Hussey called on his supporters for a general mobilization. Within a week they established their control over the country’s third-largest city, Taiz, which has a majority Sunni population and which the Houthis struggled to enter because they had few local supporters.

Houthis have been building up their military power and sending reinforcements from across the country to the south. Aden has been struck in recent days by aircraft departing from sites in the country’s north, aiming at President Hadi’s residence and the Aden Airport.

Meanwhile, President Hadi has been on the move. He left Aden Thursday and headed to the east of the country, before crossing the border into Oman. He is now in the Saudi capital Riyadh.

Houthi rebels also reached the strategically important Bab el-Mandeb Strait, which connects the Red Sea and the Indian Ocean, and is one of the most important sea gates for global shipping.  About 40% of the world’s shipping passes through it, including more than 20 million tons of oil daily.

Each party to the conflict claims that it acts in line with the results of the so-called "national dialogue" launched by political forces after the overthrow of President Ali Abdullah Saleh.

Houthis maintain they strictly abide by these rules and refuse to recognize Hadi as a legitimate president after what they call his resignation, and consider his declaration of Aden as the temporary capital unconstitutional.

They call for the continuation of the “national dialogue” in Sanaa, but Hadi and his supporters believe Sanaa to be an "occupied" city and refuse to hold talks there. Instead, they offered to conduct meeting in the Saudi capital Riyadh. Houthi forces declined, and offered Oman’s capital of Muscat as an alternative on March 25.

Houthis have renounced all charges associated with the seizure of power, and claim that they are only a part of the Yemeni people's militia, which aims to fight against al-Qaeda militants and the Islamic State, which they believe are puppets of the US and Saudi Arabia. Houthis accuse these groups of external intervention in Yemen's internal affairs, and seeking to destabilize the situation in the country in line with their own interests. Houthis believe Hadi and other members of the "government in exile" to be enemies of the Yemeni people and al-Qaeda allies in the country. Thus, they believe that they were forced to take active steps to protect the country’s population from terrorists.

Hadi maintains that Houthis forcefully seized power in the country, and accuses them of receiving financial and military support from Iran, and accuses Iran of interfering in the internal affairs of Yemen.

The Houthi rebels’ advance stirred negative reactions in areas with dominant Sunni populations in the south, as well as in the cities of Taiz, Al Bayda and Maarib.  The situation could come to resemble that in Iraq in recent years, where disenfranchised Sunni provinces became cradles for the terrorist groups that eventually evolved into what we now call the Islamic State, which has captured nearly half of that country, resulting in civil war.

© REUTERS / Khaled Abdullah
People help an injured man at the scene of a suicide bombing inside a mosque in Sanaa March 20, 2015

In March of this year, four suicide bombers attacked two Sanaa mosques during Friday prayers, killing around 150 people and injuring more than 340. It was the first attack of this kind in Yemen, a society with a relatively high level of religious tolerance that hadn’t seen much inter-confessional conflict, and where both dominant Muslim communities within the country — Shiites and Sunnis – maintained friendly relations.

On January 22, the Supreme Security Committee of Aden province called on all military forces to disregard orders from Sanaa and to maintain loyalty to local authorities. The same day, the southern movement Al Hiraki Al Janubi, which supports a large part of the population in South Yemen, called for the separation of the Aden and Hardamaut provinces.The situation started to change after the resignation of President Ali Abdullah Saleh, and al-Qaeda militants intensified their activities in the south of the country. There has been further deterioration in Yemen since and the capture of the country’s capital by the Houthis.

Here's who's in favour, and who's against, the strikes in Yemen. http://t.co/X8hZNWQyGb pic.twitter.com/HBkg3qW9LZ

Hadi said in an interview with Al Jazeera that Houthi rebels later captured his residence and demanded that he issue 120 decrees. When he refused, Saleh Es Sammad, a presidential adviser appointed by the Houthis, conveyed the message that if these orders were not signed by 9:00 that evening, he "would not bear responsibility for what would happen."

Hadi then gathered his advisers and the Yemeni Parliament and resigned. He asked "no one to argue with me on this matter."
The siege lasted until the president’s escape to the city of Aden. Hadi then announced the cancellation of his retirement, and the nullification of all orders signed after September 21.