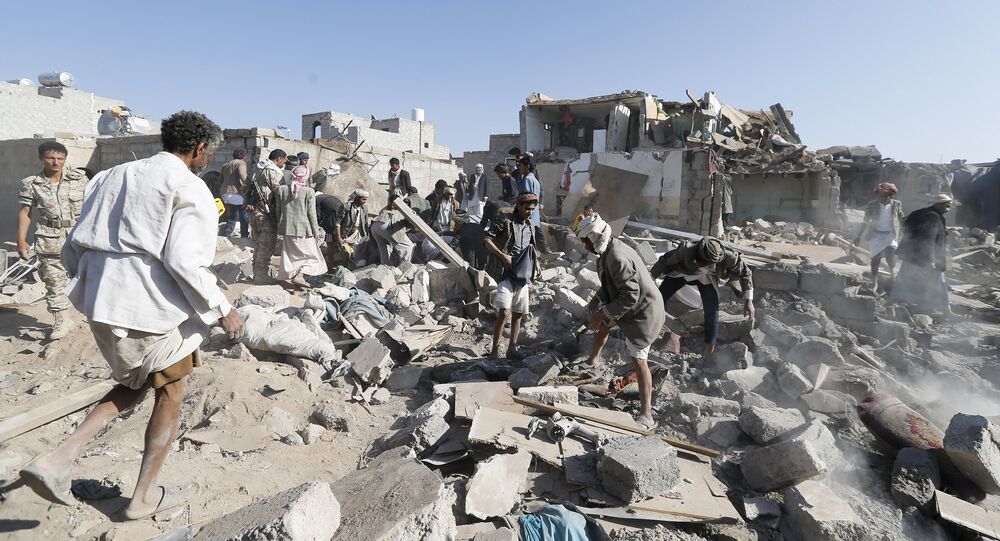 The number of victims in the residential area of Yemen's capital has reached 65. Women and at least six children under the age of 10 were killed in the Saudi Arabia-led airstrikes on Thursday morning.

“The number of victims from the airstrikes to residential areas to the north of Sanaa and in Saada has reached 65 people, including women and children,” the representative said.

At least six children under the age of 10 were among the 25 people killed in the Saudi Arabia-led airstrikes on Yemen’s capital Sanaa on Thursday morning, Amnesty International said in a statement.

© AP Photo / Hani Mohammed
Saudi Arabia Likely to Deploy Ground Troops in Yemen - US Senator
Boumedouha stressed that Saudi Arabian and any other armed forces carrying out airstrikes in Yemen are required to take all feasible precautions to spare civilians.

Amnesty International personnel confirmed the death toll with officials at four hospitals where the dead were taken to as well as with eyewitnesses, according to the statement.

The majority of those killed were men 30- to 40-years old, the organization specified. At least 20 people were injures by shrapnel.

More victims may still be buried beneath the rubble of 14 houses that were hit in a residential neighborhood near Sanaa’s international airport, the statement said.

On Wednesday, Saudi Arabia announced the launch of a military operation against the Houthi rebels in Yemen. Several other nations, including Bahrain, Qatar and Egypt, are participating in the Saudi-led airstrikes targeting the country’s capital of Sanaa.

Saudi Arabia is reportedly using around 100 fighter jets and 150,000 personnel in the military operation. The airstrikes target Yemen's infrastructure, including the government buildings and the Sanaa airport, but also hit residential areas.

in this neighbourhood north of sanaa many women and children were killed. pic.twitter.com/O1ZoxjVhkP

The Shiite Houthi group has taken control of large areas in Yemen, forcing President Abd Rabbuh Mansur Hadi and his government to resign in late January. After later escaping house arrest, he disavowed his resignation and fled to Aden in February.