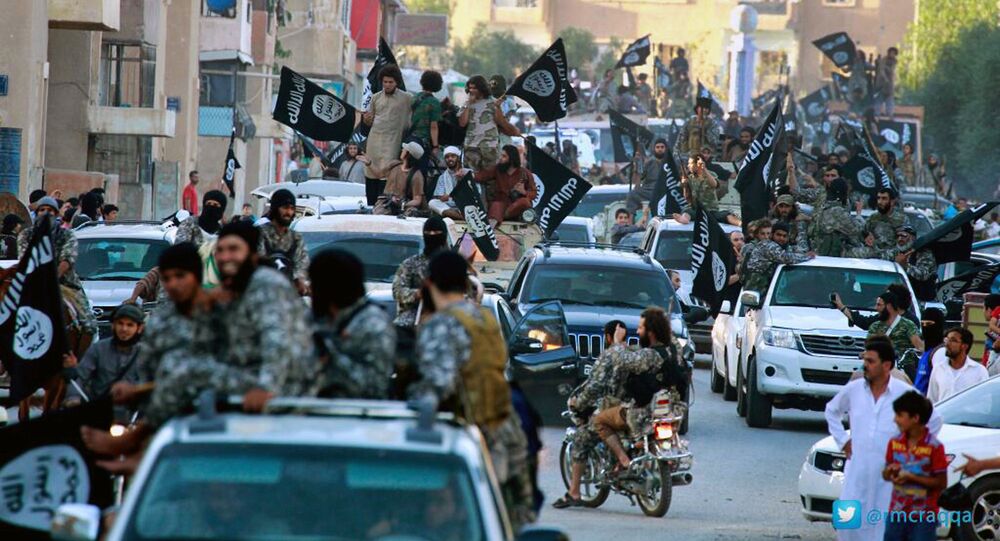 The US and Iraq are considering methods to stop the flow of money to the Islamic State.

© AP Photo / Raqqa Media Center of the Islamic State group
How ISIL Gets Its Money - Donations, Oil Smuggling, Kidnapping, Extortion
MOSCOW (Sputnik) — Islamic State terrorists have been embezzling tens of millions of dollars monthly from the salaries of Iraqi officials in occupied territories, including in the second-largest Iraqi city of Mosul, the Wall Street Journal reported.

The extremist group is spending the money on military operations, the newspaper said Monday, citing anonymous US officials.

US and Iraqi authorities have set up a joint campaign to block ISIL's income sources, the Wall Street Journal said.

© AP Photo
ISIL Funding Mainly Comes From Conquered Territory - US Treasury
According to the newspaper, US authorities were mulling whether to instruct Iraq to stop transferring funds to the local officials, with some worried that it could leave thousands of people in Mosul without their pay.

But letting things drift effectively allows ISIL militants to fortify the city ahead of the siege expected this spring, the newspaper said.

"No decision has been made one way or another as to how the U.S. should engage on [the seized funds]," the publication quoted a senior Obama administration official as saying.

© AP Photo / Niranjan Shrestha
Bloody Business: ISIL Makes Money Selling Militants’ Organs
US Treasury Secretary Jack Lew said earlier in March that ISIL receives financial support primarily from the controlled territories rather than from outside sources. He estimated that the group pulls in about $1 million a day and is considered the wealthiest terrorist group in the world.

The ISIL governs tracks of land across Iraq and Syria and operates affiliates in Eastern Libya, the Sinai Peninsula of Egypt and other areas. It occupied Iraq's key city of Mosul in June 2014.

In January, the United States began airstrikes on ISIL positions in Mosul, at the same time preparing for a joint operation with Iraqi and Kurdish forces to retake the city in spring.