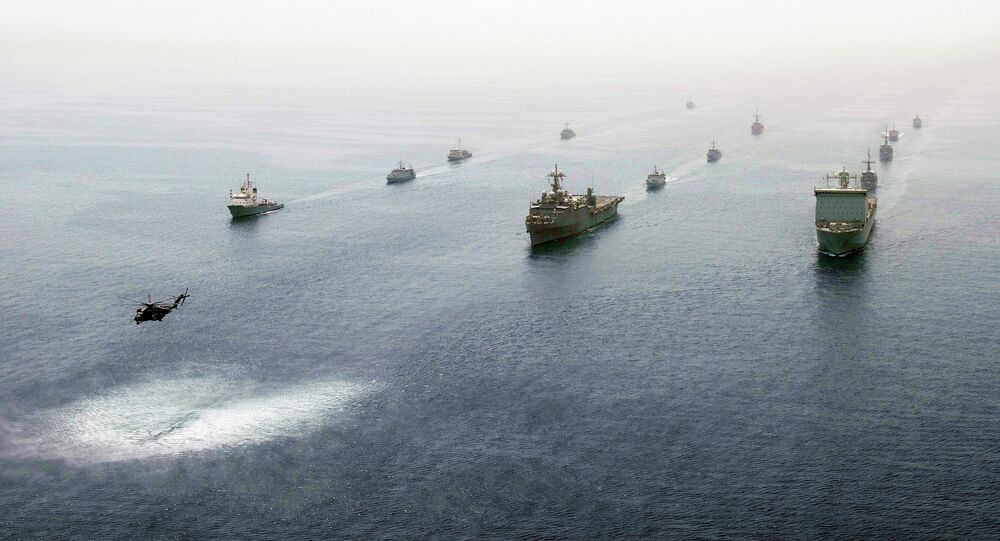 As the nuclear negotiations between Iran and the P5+1 nations come to a head, the US begins Eagle Resolve, a massive military exercise in the Persian Gulf.

With the support of regional allies, the US moved nearly 3,000 military personnel, as well as "air, land, sea, and special operations components," into the gulf on March 8. Taking place just off the coast of Kuwait, the exercise will continue through the end of the month, and is meant to improve the military’s response time should an incident occur in the region.

© AP Photo / Office of the Supreme Leader
Iran Rejects Idea of US Cooperation, Vows to Resist Washington's 'Bullying'
"Eagle Resolve 2015 will consist of a week-long series of simulated 'injects' to exercise participants' ability to respond as a multinational headquarters staff, followed by a series of tactical demonstrations of land, maritime, and air forces from several nations," reads a fact sheet provided to the Washington Free Beacon by US Central Command. "The exercise ends with a senior leader seminar to foster an environment for commanders to discuss issues of regional interest."

Eagle Resolve will involve tactical exercises from the US Army, Marines, and various other military branches to test readiness in air defense, border security, counterterrorism, as well as "consequence management." These include amphibious landing exercises and ship-based search and seizure operations.

Officials insist that the exercise has been in the planning stages for the last 14 months, and has nothing to do with the Iranian nuclear negotiations.

"The exercise is not intended as a signal to Iran," a CENTCOM official said, according to the Free Beacon. "If there’s any message at all, it’s that all participants have a common interest in regional security."

© AP Photo / Maya Alleruzzo
Special operations forces during a vessel board search and seizure exercise in the Gulf of Aqaba in 2013.

"It’s important to point out that this is a recurring exercise, with planning for this year’s exercise beginning over a year ago," the official added. "The focus of the exercise is on bolstering capabilities useful in a wide range of scenarios to help preserve and bolster regional security, with simulated portions of the exercise based on a fictional adversary."

Still, it’s hard to ignore which nation that “fictional adversary” may be in reference to. On Saturday, former CIA Director General David Petraeus called Iran the greatest long-term threat to stability in the region.

© AFP 2020 / BRENDAN SMIALOWSKI
Obama Says Final Deal on Iran Possible, but More Tehran Concessions Needed
"I would argue that the foremost threat to Iraq’s long-term stability and the broader regional equilibrium is not the Islamic State; rather, it is Shiite militias, many backed by – and some guided by – Iran," he told the Washington Post.

It’s a view echoed by many US lawmakers and military officials. Given that the deadline for a framework deal on the controversial nuclear negotiations is fast approaching, it’s hard to ignore the potential message of a large-scale military exercise.

Still under discussion, any agreement with Iran is likely to allow a gradual increase in its nuclear capabilities so that the nation may develop nuclear energy for peaceful purposes. Should Iran stray from any agreement and pursue a nuclear weapon, it would face "tremendous costs and consequences."

PAUL NADOLSKI/US ARMY
Principles Please? US Lauds NATO Drills But Calls Russian Ones Provocative
"There are a number of things that the United States has available to it to prevent Iran from getting a bomb," CIA Director John Brennan told Fox News on Sunday. "President Obama has made it very clear that we are going to prevent Iran from having that type of nuclear weapon that they maybe were going on track to obtain."

It’s also worth noting that Iran only recently negotiated an arms deal with Russia which was aimed at increasing its naval presence in the Gulf.

"The Indian Ocean is a stage for the big powers to display the power of their fleets, and the presence of this flotilla shows that we are active and powerful on this stage, too," Colonel Ebrahim Rouhani, Iran’s Military Attaché in Sri Lanka said, according to Fars News Agency, after the Iranian Navy’s 33rd fleet sailed through international waters last month. That display likely concerned US officials.

"Eagle Resolve is an excellent opportunity to improve our ability to partner with Gulf and international forces at the operational level and identify best practices in asymmetric threats," CENTCOM says.

NATO to Kick Off Military Exercise Near Russia