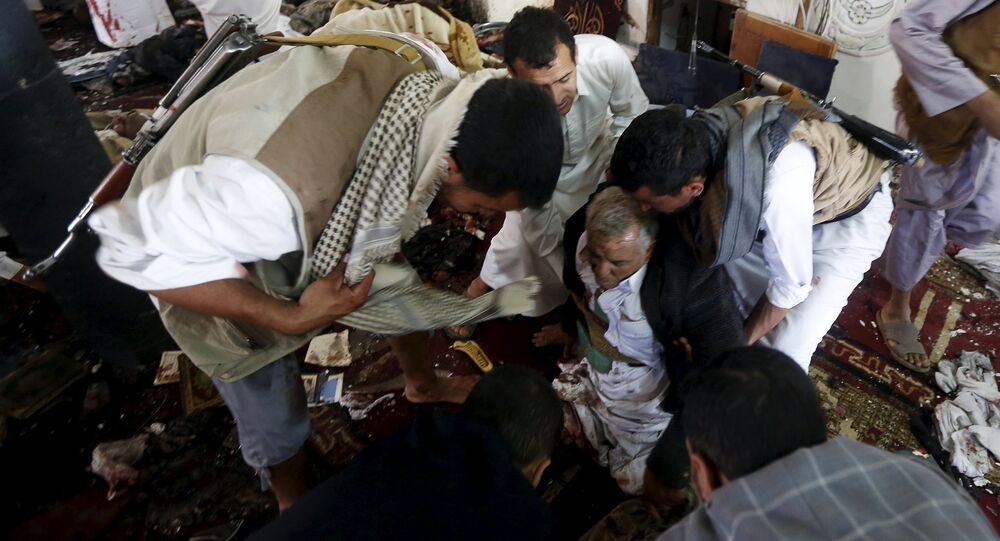 Initial reports estimated the death toll at 30 people. Following the explosion, dozens of dead and injured were moved to a hospital in Sanaa.

According to media reports, up to 200 people have been injured.

Another blast hit a government building in the Saada governorate in northern Yemen Friday, a local source told Sputnik.

Witness told AP: "The heads, legs & arms of the dead people were scattered on the floor of the mosque. Blood is running like a river” #Yemen

"Security forces cordoned off the area," the source said, adding that currently unknown whether anyone was killed or injured.

This amateur video claims to have captured the immediate aftermath of one of the explosions:

He added that the dead include three high-ranking Houthi leaders: Taha Al-Madani, Taha Al-Mutawaqil, Al-Murtadha Bin Zaid Al-Muhatwari, the latter being the imam of the Badr mosque and considered the spiritual leader of the Houthi movement.

1 / 2
© Sputnik / Faisal al-Shabibi
A victim of the attack on a Mosque in Sanaa on March 20, 2015. A Sputnik correspondent took these photos at the scene of the explosion.

"There is a very tense atmosphere in the city. Hospitals are asking people to donate blood for victims of the terrorist attack," al-Matari told Sputnik.

Power in Yemen is currently in the hands of the Shiite Ansar Allah militias. In late January, Yemeni President Abd Rabbuh Mansur Hadi and the country's government resigned after the militias captured the presidential palace and government buildings.

On February, 6 Houthis dissolved the Yemeni parliament and created a presidential council in a "constitutional declaration."