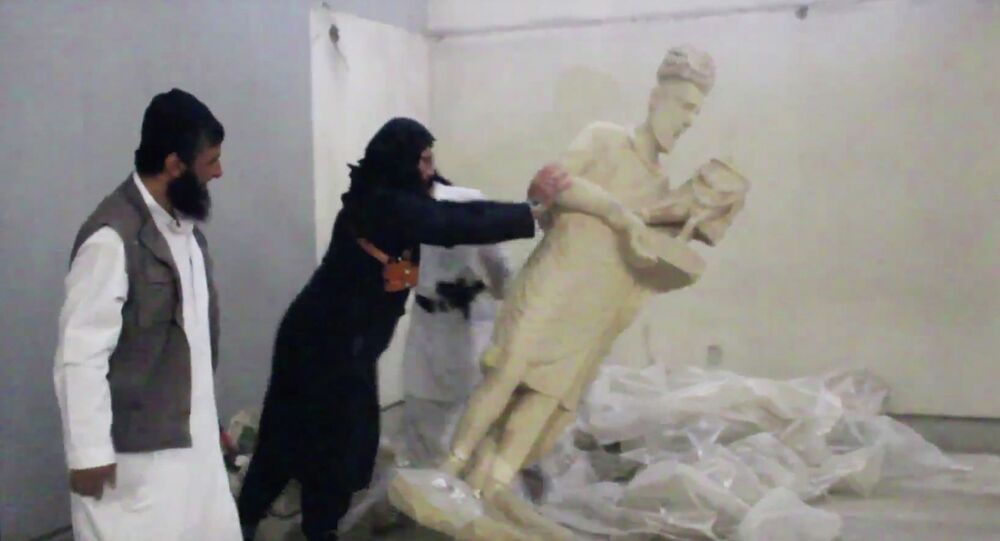 General Director of the Department of Media and Relations at Ministry of Tourism and Antiques in Iraq reveals that the artifacts destroyed by ISIL militants were indeed real.

The jihadists of the Islamic State filmed themselves destroying Iraq’s ancient treasures a few weeks ago.

The world watched in horror as jihadists took to hammers and destroyed what appeared to be irreplaceable ancient statues and artifacts.  In the days that followed the head of the country’s national antiquities department claimed that they were plaster copies of priceless originals.

© AFP 2021 / ALI AL-SAADI
Destroying Cultural Sites: Something ISIL and US Army Have in Common
Allegedly, the curators at the Baghdad Museum studied the video and found that many of the artifacts that appeared to have been destroyed were in fact safe inside their own museum.

However, it was now revealed in an interview with Qassem Taher Al-Soudani, General Director of the Department of Media and Relations at Ministry of Tourism and Antiques in Iraq that the artifacts were indeed real.

“Everybody knows that ISIL is fighting a man, a culture, a history. ISIL is the enemy of yesterday, today and tomorrow. Assyria and Nimrud are real historic sites and cultural heritages. So, the artifacts ISIL destroyed in the two cities are real,” Soudani told Sputnik Arabic.

“We appreciate that UNESCO took the matter seriously and demanded the UN Security Council to issue a new resolution and to hold another urgent meeting together with the Ministry of Tourism and Antiques in Iraq.”

He further said, “Today we gather along with Heads of Diplomatic mission and Ambassadors to Iraq in the National Museum of Iraq to call on the world to save the Iraqi artifacts, as they not only represent the cultural heritage and civilization of Iraq but of the whole of humankind, as well.”

“We are quite satisfied for we have now the UN resolution 2199 (2015) whereby the UN Security Council condemns (and prevents) the trade of Iraqi artifacts and antique pieces."

In the process of combating the ISIL militants, a US led coalition has carried out air strikes. Additionally, there has been an ongoing debate as to whether they should introduce ground operations as well.

The scenario is reminiscent of when the US forces invaded Iraq in 2003 and the museum of Baghdad was destroyed and many historical artifacts were looted, losing thousands of years of culture and history.

There is alas, little hope that this time around things would be any different as the destruction that has been caused so far is immense and irreversible.

US to Repatriate Over 60 Cultural Treasures to Iraq

ISIL Destroys Another Mosque in Iraq