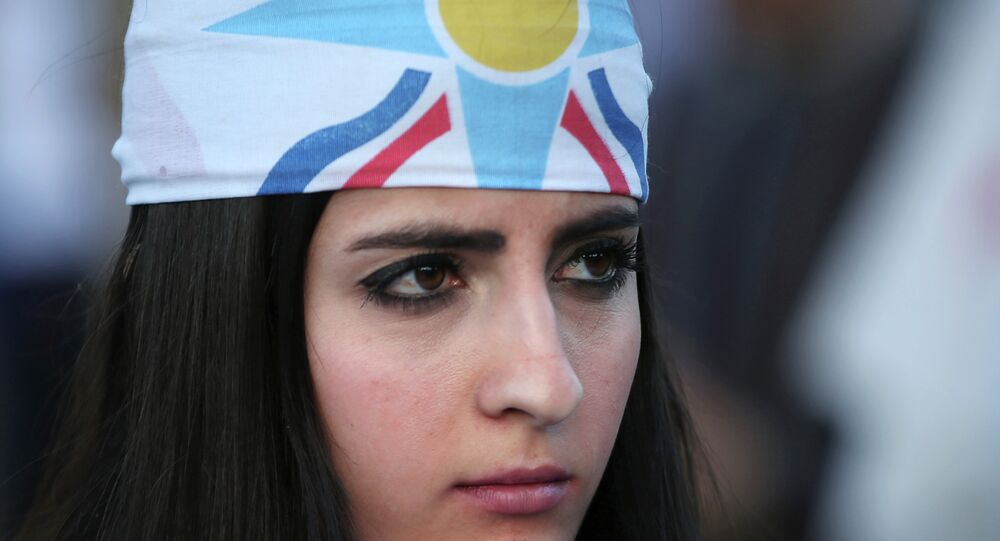 Assyrians, considered the earliest group to adopt Christianity, are suffering violent attacks by Islamic State and other extremist organizations. Religious leaders, both in Lebanon and the Vatican, have classified the recent acts as genocide.

Russia, along with the Vatican and Lebanon, issued a declaration last week at the UN Human Rights Council's 28th session in support of Christians and other repressed religious minorities in the Middle East.

"We do not have a state, so we cannot turn to the International Criminal Court. But we can use the help of our friends. This concerns both the genocide in World War II and today," Ashour Givargis said.

© AP Photo / Mohammad Sajjad
Two Blasts in Pakistani Christian District Leave at Least 10 Dead, Scores Injured
Speaking at a conference at the Rossiya Segodnya news agency, Givargis said Russia is "the only one that helps us today, speaking in our defense," through the Imperial Orthodox Palestine Society and the Ministry of Foreign Affairs.

"We are unarmed, we cannot offer resistance, which is why we rely on your help," the APM leader said.

Over the past several weeks, reports have emerged of the Islamic State and other extremist organizations abducting hundreds of Assyrian Christians in northern Syria, acts strongly condemned by Moscow.

© AFP 2021 / US AIR FORCE
International Coalition Turns Blind Eye to ISIL Abduction of Christians – Official
Religious leaders, both in Lebanon and the Vatican, have classified the recent acts as genocide.

Assyrians are an ethnic group whose historic home lies in southeast Turkey, north Iraq and northeast Syria, and are considered the earliest group to adopt Christianity.

The Assyria Patriotic Movement was formed in 2012 with the mission, according to its website, to bring attention to widespread Assyrian emigration and the failure of its institutions "to convey the Assyrians' sufferance" on the world stage.

Foreigners Being Recruited to Christian Militia in Syria