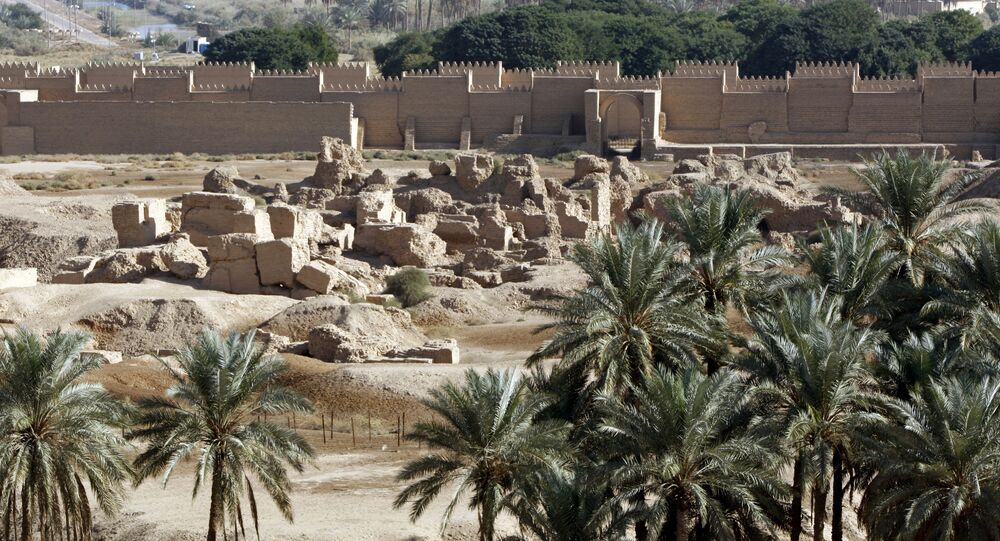 A former US Foreign Service employee reveals the scale of the destruction of ancient artifacts in Iraq during the occupation of the country.

© AP Photo / Antonio Castaneda, File
ISIL Destroying 2,000-Year-Old City of Hatra in Iraq – Kurdish Official
As Iraqi officials are estimating the extent of the damage done by the Islamic State militants to one of the country's UNESCO World Heritage Sites, the ancient city of Hatra, a former US Foreign Service employee, Peter van Buren, has revealed that the US Army also wrought a lot of damage to some of the country’s historical landmarks.

On Saturday, Islamic State militants started destroying the 2,200-year-old site, having looted all of the ancient gold and silver coins that had been preserved.

Several days earlier, the Iraqi government said that ISIL fighters had attacked the ancient Assyrian city of Nimrud in northern Iraq and bulldozed it with trucks.

But as it turns out, the ISIL fighters are not the only ones who damaged sites in the Tigris and Euphrates valleys.

A former US Foreign Service employee, Peter van Buren, who was embedded with the US Army in Iraq in 2009, has revealed that the US also contributed to the destruction of ancient places.

© AP Photo / Bullit Marquez
A Polish soldier walks back to his tent just outside the ancient City of Babylon, 80 km (50 miles) south of Baghdad, Iraq on Wednesday July 16, 2003

“Early in the 2003 invasion of Iraq, US Marines built a helicopter pad on the ruins of Babylon,” van Buren writes in his article for the Reuters. “They filled sandbags with archaeological fragments, pulverized ancient pottery and bricks engraved with cuneiform characters and christened the place Camp Alpha.”

“The scale and intent were obviously different from what the Islamic State is doing, but a loss is a loss, in big bites or small ones,” he adds.

Peter van Buren also wrote about how the country’s ancient villages, which he calls “tells”, attracted the US soldiers, who would sometimes drive their military SUVs there, doing “donuts” and enjoying kicking up dust plumes.

© REUTERS / Heinz-Peter Bader
Razing of Ancient City in Iraq by ISIL Constitutes War Crime, UN Says
“People said that when the US Army first built the forward operating base and dug up truckloads of dirt, soldiers found ancient skulls and long bones,” he wrote. “You could sometimes still spot old bones in the earthen barriers protecting the base. The Army used one ancient tell nearby for artillery practice, blowing off most of its top. As one soldier said, 'If it’s old and already broken, why does it matter if we shoot at it?' That same area was turned over to the Iraqis, who use it today as a live-fire exercise zone. Forward Operating Base Hammer is still open for business, now as a depot for the M1A1 tanks the United States is selling to the Iraqis. I’m not sure of the status of what’s left of the on-base archaeological site.”

On Monday, UN Secretary General Ban Ki-moon called the reported destruction of Hatra by Islamic State extremists a war crime, and called on the international community to protect cultural artifacts.

But nobody so far commented on the leftovers from the US Army. Baghdad's Iraqi Museum was plundered in 2003 shortly after the city capitulated to American troops, prompting widespread censure that nobody had taken steps to protect its world-class collection of Sumerian and Babylonian artifacts.

The museum, which re-opened several weeks ago, estimates that approximately 15,000 items were taken in the chaos. Only one-third have been recovered.

ISIL Destroys Another Mosque in Iraq