Three girls who ran away from their London homes are now believed to be in the city of Raqqa, a city in northern Syria that serves as ISIL’s headquarters. Authorities long suspected they were headed to Syria to join ISIL. Now it seems they arrived.

Shamima Begum and Amira Abase, both 15, and 16-year-old Kadiza Sultana boarded a Turkish Airlines flight to Istanbul on February 17. 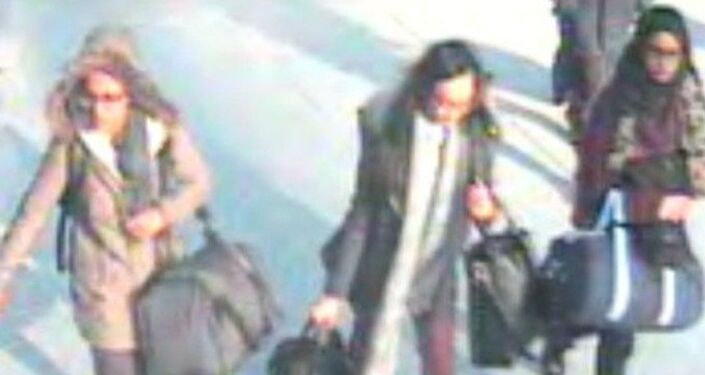 Metropolitan Police
Kadiza Sultana, Shamima Begum and Amira Abase caught on security camera in London
British and Turkish intelligence services searched for the girls and looked into their phone communications and social media accounts suspecting they were in contact with other women who had made the trip earlier.

The British broadcaster SkyTV News announced that sources say the girls are staying in a house in Raqqa.

"They're now apparently in a house that is owned or controlled — or at least hosted by — a British girl who had been in contact with them through the internet, and had brought them through Turkey and into Syria,” a SkyTV News host declared.

© AFP 2021 / JUSTIN TALLIS
London Police Monitor 4 Schoolgirls Over ISIL Recruitment Fears – Reports
"We are told by… good sources within the city of al Raqqa that they are there, that they are safe,” he added.

The city is ISIL’s Syrian capital and is fully under ISIL’s control suggesting the girls are now in a ISIL home.

Now another four pupils at London’s Bethnal Green Academy are being monitored by local police amid fears that they may try to join ISIL, local reports have revealed. Bethnal Green Academy is the same school attended by the three girls now believed to be in Raqqa, suggesting that students there are in communication with Islamic radicals.

They believe that they — along with the three girls who already made the trip — are being recruited by a girl who fled to Syria from the same school last year and with whom they have been in contact.

© AP Photo
French PM Says 10,000 Europeans Could Be Fighting for ISIL by Year-End
In 2014, 22 British women traveled to Syria to join the self-proclaimed Islamic State, according to local law enforcement. Only four were over the age of 20.

ISIL has been recruiting from more than 80 countries, including about 500 Britons. Many enter Syria and Iraq through Turkey. While world leaders have demanded that Turkey make more of an effort to detain them, Turkey has responded that they require more complete and timely information from Western intelligence agencies.

British Interior Minister Theresa May has presented a draft law that would give the government power to prohibit British residents to travel to Syria and join ISIL. The legislation would increase cooperation between security forces and the airlines in spotting potential recruits, particularly minors.