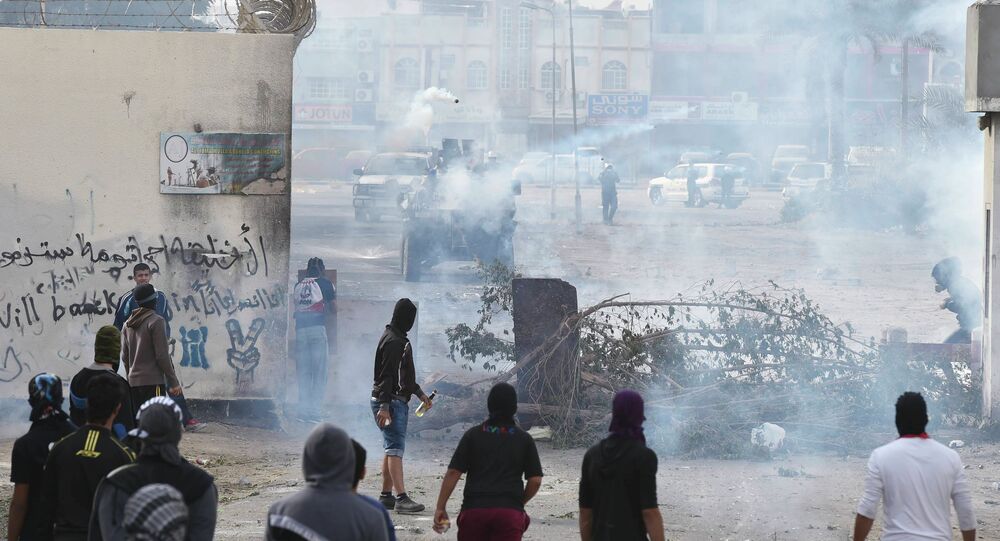 © REUTERS / Hamad I Mohammed
UN Asks Bahrain for 'Clarification' on Charges Against Opposition Leader
MOSCOW (Sputnik) — Hundreds of protesters took to the streets of the Bahraini capital, Manama, on Saturday calling for political reforms and release of the main opposition leader, Al Jazeera reported.

The rally marked the fourth anniversary of the start of anti-government protests on February 14, 2011, the media said.

Protesters mostly from Shia Muslim majority of the country demanded a "real" constitutional monarchy with a prime minister independent from the Sunni royal family, according to the broadcaster.

These roads are mine — said #Bahrain protesters today 14 Feb 2015 pic.twitter.com/amlrNoGyic

The demonstrators also called for the release of Sheikh Ali Salman, the leader of the largest Shiite opposition party Al-Wefaq, who was arrested in last December on charges of inciting a violent regime change through illegal practices.

a female protester wearing goggles stands on a street during clashes in the village of Bilad Al Qadeem, #Manama! pic.twitter.com/o6f0O2wKMw

© AFP 2020 / MOHAMMED AL-SHAIKH
Bahraini Opposition Leader May Face Up to 19 Years in Prison, Lawyer Says
The public security chief, Maj. Gen. Tariq Hassan, warned that people should "stay away from disruptive activities that might affect security or public order," as quoted by Al Jazeera. He stressed that calls to participate in the demonstration will be considered as crime.

Since 2011, Bahrain has been mired in Shia Muslim uprisings against its Sunni leaders. Shia Muslims, who form a majority in Bahrain, initiated the protests to achieve greater political freedom and equality as they claimed the regime under the Sunni Al Khalifa royal family infringes upon their rights. The protests resulted in brutal crackdowns on the opposition.

Who controls the roads today in #Bahrain? @reportedly pic.twitter.com/ZcrkiG2l6e