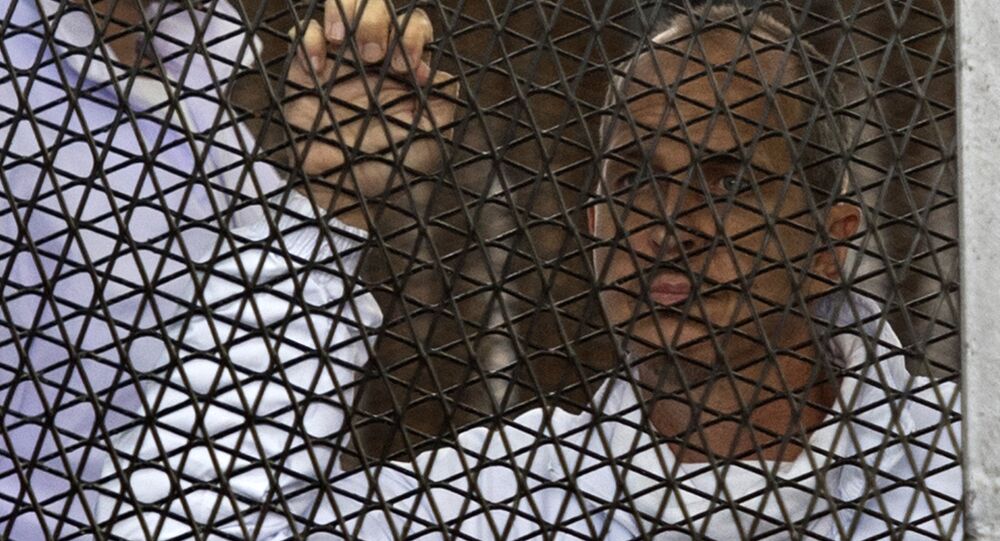 The journalist has been imprisoned since December 2013, after Egypt's government banned Al-Jazeera from the country.

MOSCOW, February 1 (Sputnik) — Peter Greste, the Australian al-Jazeera journalist jailed in Egypt since December 2013, has been released and has left the country, Reuters reported.

Al Jazeera welcomes the news of @PeterGreste's release and demands the release of Mohamed Fahmy and Baher Mohamed. #FreeAJStaff

"There is a presidential decision to deport Peter Greste to Australia," a senior interior ministry official told AFP.

According to DPA, Greste left Cairo on an EgyptAir flight bound for Cyprus.

AFP reported that Greste has been deported to his native Australia, and that Canadian-Egyptian Mohamed Fahmi is also eligible for deportation under a presidential decree which allows the deportation of foreigners to serve sentences in their home countries, AFP reported. The fate of the third al-Jazeera journalist, Egyptian Baher Mohamed, who has been sentenced to 10 years is unknown.

"We will not rest until Baher and Mohamed also regain their freedom" http://t.co/zncvczfpoz #FreeAJStaff pic.twitter.com/wNqn3KT860

The journalists worked in what the local media came to call "the Marriott Cell," named after the hotel chain from which the clandestine al-Jazeera bureau operated, according to AFP

All three men were accused of conspiring with the banned Muslim Brotherhood, amid a nationwide crackdown on the organization. The journalists received between seven and ten years in jail. Egypt’s Court of Cassation overturned the sentences in the beginning of January. The case has sparked international condemnation.