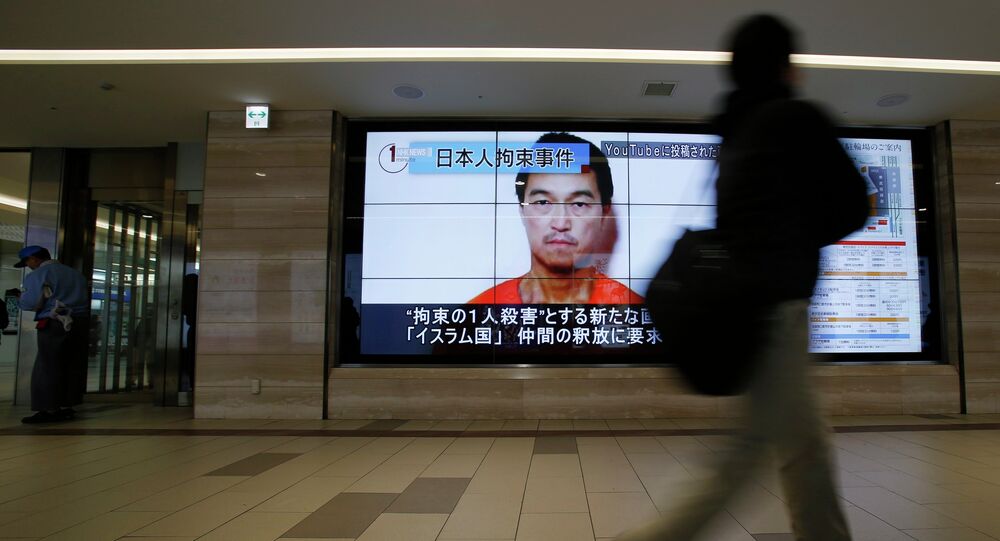 Jordan Buckles Under Pressure From IS, Planning Prisoner Exchange

The next few hours will be decisive for the release of Jordanian pilot Mu'ath al-Kaseasbeh and Japanese hostage Kenji Goto, two hostages held by the IS.

MOSCOW, January 28 (Sputnik) — The Islamic State set a 24 hour deadline for the release of Sajida al-Rishawi, who was detained and convicted by Jordanian authorities when her explosives belt failed to detonate during the al-Qaeda-led 2005 hotel bombings in Jordan's capital Amman, as reported by Al Jazeera.

© AP Photo /
Islamic State Says Japanese Hostage, Jordanian Pilot Have Less Than 24 Hours to Live
Rishawi has possibly been moved to a Jordanian prison in preparation for her release according to several anonymous sources. Arabic Twitter handlers affiliated with the IS later said that while the Jordanian government's agreement to release al-Rishawi would ensure the simultaneous release of Japanese freelance journalist Goto, it would merely ensure the survival, not the return, of al-Kaseasbeh.

Last week, the IS released an initial video featuring Kenji Goto holding an image of slain Japanese hostage Haruna Yukawa along with a warning that the group had abandoned their call for a $200 million dollar ransom from the Japanese government, asking for al-Rishawi's release instead.

On Tuesday, the head of the Foreign Affairs Committee of Jordan’s parliament said the country would "likely" accept a deal to release a prisoner on death row in exchange for a Japanese hostage if the swap also included Jordan's captured fighter pilot, news website JO24 reported.