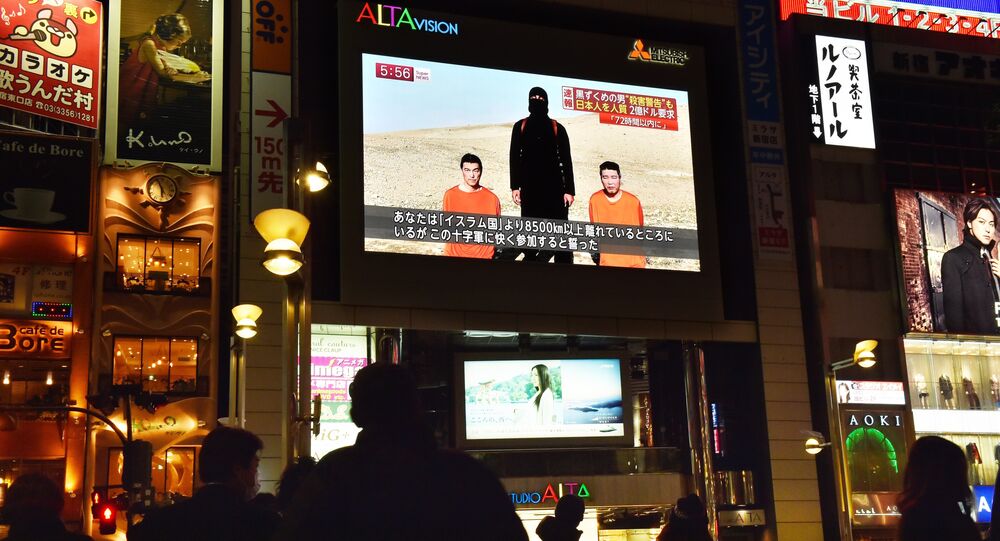 Japan's Minister for Foreign Affairs, Fumio Kishida, had a brief telephone conversation on Wednesday with his Iranian counterpart, Minister Javad Zarif, to ask for the support of the Islamic Republic.

© REUTERS / Yuya Shino
Tokyo Vows to Use All Diplomatic Routes to Free Two Japanese Captives of IS
MOSCOW, January 22 (Sputnik) — Japan is seeking assistance from Iranian authorities in securing the release of two of its nationals, captured in Syria by the violent Islamic State (IS) group, the Japanese Foreign Ministry has confirmed.

A spokesperson for the ministry announced that their Minister for Foreign Affairs, Fumio Kishida, had a brief telephone conversation on Wednesday with his Iranian counterpart, Minister Javad Zarif, to ask for the support of the Islamic Republic, which is considered to hold weight in Middle Eastern affairs.

A list of key points discussed is available on the Japanese Foreign Ministry's webpage.

© AFP 2020 / Paul J. Richards
US Demands Immediate Release of Japanese Hostages Held by IS
"Japan would like to ask for the support of the Iranian government in gathering information on facts of the situation and the cooperation towards early release of the Japanese nationals," the statement read. It referred to a cooperation deal reached at last year's summit meeting between Japan and Iran.

The captives are thought to be Haruna Yukawa, the founder of a private security firm, and Kenji Goto, a freelance journalist; both of whom were abducted in Syria last year.

Zarif said he "strongly condemned" the IS group and pledged to "continue our discussions towards the peace and stability of the Middle East," the ministry relayed.

A video available online purporting to show two Japanese captives was released by Islamic State on Tuesday. A man, who appears in the footage beside the kneeling hostages, threatens to kill the captives unless a $200-million ransom is paid by the Japanese government.

The sum of the ransom corresponds to the amount previously pledged by Prime Minister Shinzo Abe to finance countries fighting against the IS insurgency.

What We Know About Japanese Hostages From IS Video